E-marketing at Starbucks: another missed opportunity? 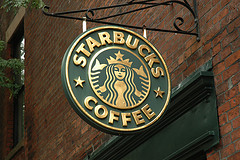 Starbucks is a brand that, similarly to IKEA, enjoys a strong culture, a loyal customer following, and a compelling “founder and origin” story.  As Howard Schultz recounts in his memoirs, the beginning of Starbucks was characterized by a fierce commitment to bringing all the excitement, the passion and the quality of an Italian coffee house to America.  To me, it is a wonderful story of entrepreneurship and vision, of attention to detail and quality.

As a marketing company, Starbucks has also proven its merit.  Today, they have locations in many countries around the world, and devoted groups of regular visitors at most of their stores.  In spite of all this, they do not seem to have done so well in managing their community, at least the way I see it.

Starbucks vs. Dunkin’ Donuts, by the numbers: I recall reading, sometime in the spring of 2010, that Dunkin’ Donuts had 80% fewer followers on Facebook and Twitter than Starbucks.  That single statistic would lead one to believe that Starbucks has been more successful than its rival in social media activity.  But, if we dig a bit deeper into this story, we find that Dunkin’ Donuts may have fans that are more valuable to the brand.  In fact, a study from the same time period revealed that a Dunkin’ Donuts partisan is 35% more likely than a Starbucks follower to recommend the company to his friends.

I should emphasize that my purpose in citing this example is not to criticize Starbucks or to praise Dunkin’ Donuts.  In fact, I’ve been a good customer of both companies for many years.  Rather, I put forward this case to highlight two points.  First, a simple look at numbers often does not tell the entire story.  Second, we should explore some of the reasons why Dunkin’ Donuts seems to get more out of its community of fans than Starbucks does.

The first point: Numbers alone rarely tell an entire story.  Take the example of email.  As we have seen in the past, a company might have an impressive email list, but many individuals on that list may be passive recipients who generate little activity.  Another company with a far smaller list may be more effective at mining data, engaging and targeting their customers, and sending relevant content that leads directly to sales.

It is much the same with social media.  Simply having a large number of followers on Twitter, or a sizeable Facebook “community” does not guarantee results, either in terms of sales or positive impact to brands.  What does make a difference is engagement, but that is a notion that can be hard to measure.  As social media becomes increasingly pervasive, we must develop new metrics that focus on the activities of our fans rather than on their sheer numbers.

So, in the world of e-marketing, we must learn to look at a combination of old, traditional metrics—such as new customers or purchases generated—and some newer soft metrics, such as our e-reputation and the “social value” of our brands.   One emerging concept today is the notion of “social currency”, which attempts to measure a company’s ability to engage stakeholders as partners in growth and sustainability.  Though difficult to compute in terms of return on investment, growing our social currency and online reputation will create substantial value in the longer term.