How to keep our mood light in trying circumstances 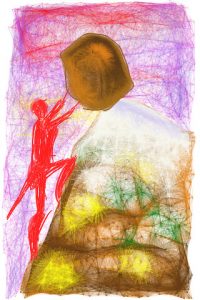 Among the most effective devices we found for keeping our mood light and positive while performing the tough job of scraping cases in the winery was simply laughing at the absurdity of our situation. Once we had the feeling of being together in a flow—joking and telling anecdotes—we were free to make fun of ourselves and the hard work and drudgery in front of us.

To understand why the labor we were doing had such a farcical or comedic side, it is helpful to visualize the large room we worked in, set apart from the mainstream activity of the warehouse.

Near the middle of our spacious work area, with its cement floor and grey concrete walls, sat three or four makeshift workstations. Each location had a variety of razor-sharp tools, along with several benches and chairs. We could use the chairs and benches to do this job either standing or sitting, in a variety of positions. In this way, we could ease some of the strain of the continuous repetitive movement.

In one corner of this space lay the boxes waiting to be redeployed, hundreds of them stacked neatly in piles, five or six high. We would go there to fetch a case and bring it back to one of the work stations. There, we would perform our assigned task of removing the emblazoned logos, scraping back and forth for the next 20 to 30 minutes.

When that chore was complete, we would walk about 50 steps to leave the box in the corner diagonally across from the stacks of undone cases. Then, we would take a deep breath, walk back to the other side, and begin the process anew. After a while, it could start to feel like an endless loop of walking, scraping, walking.

As such, there was not only a repetitive component in the action of scraping, but also a lack of variation in the overall process—going to one side to get a new case, scraping the case clean, then going to the other side to drop the case among the completed ones. Performing this task for several hours could prove somewhat mind-numbing.

The physical demands and the monotony of this exercise reminded me of a legend I knew from ancient Greece—the myth of Sisyphus. In this fable, the protagonist is a mortal who committed an act so egregious that the gods on Mount Olympus decided to give him the worst punishment they could design. Thus, he was condemned for all eternity to push an enormous boulder up a mountain. Each time he arrived at the summit, the rock would roll back to the bottom under its own weight, leaving Sisyphus to begin the upward journey over again.

As I had recently reread this tale in my literature course in Paris, the character of Sisyphus was fresh in my mind. Therefore, it felt quite natural for me to relate the anecdote to my various partners in the scraping room.

“This is probably the style of punishment that the gods of ancient Greece would have liked for Sisyphus,” I joked one day. In actual fact, we did have an endless supply of containers to clean, and our reward for successfully completing one was that we could begin straight away with the next one. Though not entirely comparable, there were certainly some parallels to be drawn between our circumstances and those of Sisyphus.

“What an absurd existence,” I commented after retelling the anecdote to each new listener. “Just like in the Greek myth.” With many of my colleagues, we laughed for days and days over this story of the man for whom the gods had reserved the worst of all possible fates.

Once more, we discovered that laughter was a uniquely valuable remedy. If we could convince ourselves that our condition was absurdly comical rather than tragic, and if we could simultaneously produce better results than the boss expected, we could choose to enjoy our struggle by turning it into something of a game.