Reframing in the scraping station 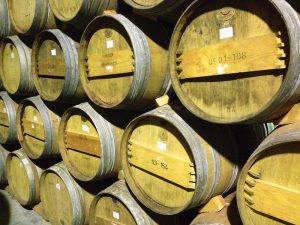 In the previous post, we observed that there was one place that nearly all the winery workers found particularly burdensome—the room where we scraped the wooden cases. At the same time, though, I see now that it was also a context that presented intriguing opportunities for reframing. Today, I propose to take a closer look at the specific work we did there, and how modifying our mindsets became an essential aspect of our happiness and success.

When I use the word reframing, I should emphasize again that it is a word I came to use many years later, when I began to study the power of changing mindsets. At the time of my summer work in the winery warehouse, my colleagues and I were simply trying to find ways to make an unpleasant task a bit more palatable, to help us feel that our time there was going by faster.

In simple terms, it is useful to think of the goods we sold as falling into two broad categories. Most of our products were intended for everyday consumption, and they were packaged in plain cardboard cases of 12 bottles. The more exclusive wines, with prestigious chateau names and higher prices, were handled with greater care. For their protection, and also because of their upscale image, these were housed in cases made from sturdy, durable wood.

These hardwood containers were hand-crafted and quite costly to make. As such, they were designed to be reused as many as five times, and for a variety of brands. Before each one could be redeployed, though, the logo of the previous product had to be removed. While this may sound simple in concept, it was among the most arduous of all the physical chores I have ever engaged in.

Most logos were burned deeply into the tops of the wooden cases. After determining that the container could indeed be reused, we would work to smooth out the wood’s surface, applying pressure with razor-sharp hand tools, shaving steadily back and forth. It took about 15 or 20 minutes of that motion to scrape the top surface clean.

Of course, we recognized that removing logos from these boxes was a necessary part of an elaborate marketing process. At the same time, though, we simply dreaded doing it. By the end of an afternoon of such activity, our forearms were tired, heavy and sore from the constant force required, and from the repetitive nature of the movement.

Since our supervisors knew how taxing this work was, they avoided assigning any individual to the scraping station more than one day per week. In addition, they would never send us there alone.

From my perspective, having a partner or two alongside me provided something reassuring, a sense of camaraderie that came from sharing a difficult moment together. It also presented unforeseen opportunities for reframing.

Since the scraping took place in areas isolated from the other activities in the warehouse, a pair of us working were free to organize ourselves as we pleased. As long as we cleaned reasonable numbers of cases in the allotted time, our bosses did not care about how we accomplished the task. Slowly, we came to realize that we could define our own reality during the time we were there.

Thus, as that summer wore on, we became increasingly innovative about developing strategies to pass the time. Again, I should emphasize that none of this arose from a grand design to be clever about how we could be spending our hours in the scraping station. If we did succeed in finding fresh approaches, it was merely from a desire to take our minds off the arduous nature of the undertaking in front of us.

In the end, some of my favorite moments happened when I worked one-on-one with someone in that scraping station. While performing the required work, we used humor, friendly competition, mock protest, personal storytelling, and other tricks to make our time there interactive and pleasant.

Next time, I will provide some further detail about how we discovered and used these tactics, and about some of the lessons that stemmed from that experience.