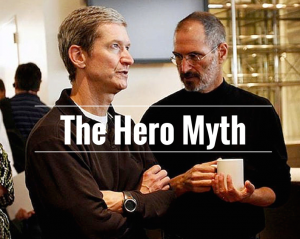 One of the subjects I have often spoken about for the past twenty years—in keynote addresses and corporate seminars—is “the myths and realities of leadership”. In these settings, I use the term myth to mean something that society persists in believing, in spite of the fact that it is clearly not true.

For example, one of our common misconceptions is what I call the Hero Myth, a tendency to see transformational leaders as larger-than-life figures capable of “changing the weather”, as Winston Churchill said his ancestor John Churchill could. We want to turn them into icons, astonishing individuals with prodigious capabilities. They influence their worlds in far-reaching and enduring ways, by virtue of amazing vision, inspirational qualities, or simply an extraordinary capacity for work.

In reality, even the most influential leaders are never the mythical supermen we create in our minds, with our tendency to want to turn them into legends. And, even in the most dramatic examples of change, leadership is never exercised in a vacuum. It is not great individuals but rather great groups that change their worlds in deep and enduring ways. In every case, it is an interaction between the leader, his or her followers, and a “future story”, a vision of something noteworthy that they can accomplish together.

In my efforts to debunk the Hero Myth, I find Steve Jobs to be a particularly edifying example. He is arguably the iconic business leader of our time, and certainly one individual with an oversized, even superhuman, reputation. The popular image of Jobs is that he lorded over Apple, an irascible and impulsive commander who willed products into existence, had his hand in everything, made nearly all major decisions, and singlehandedly enforced insane standards of excellence.

Of course, we know these things must be hyperbole, simply because of the physical and intellectual limitations of any one human being. Nevertheless, the exaggerations and heroic myths persist.

In light of my interest in the concept of “Steve as Hero”, and because of the larger-than-life impressions his theatrical style and premature death have etched in our collective minds, I read with considerable interest an interview with his successor in a recent issue of Fast Company.  Current CEO Tim Cook worked perhaps more closely than anyone else with Jobs, and his perspective lends some credibility to my assertion that our heroic images of him, or anyone else, are distortions of reality.

Here is what Mr. Cook has to say about his predecessor’s supposed omnipresence in the company and involvement in every decision: “Steve was almost viewed from the exterior as the micromanager checking to make sure…that every circuit was correct, that every color was exactly right. And yes, he made a lot of decisions. His capacity was unbelievable. But he was just one person—and he knew that.”

Not only could Steve Jobs not be everywhere, according to Cook, his impact was largely misunderstood by those outside the organization. For those closest to him, the key to Jobs’ effectiveness was not so much in his controlling of things, or in his renowned outbursts, or in his attention to exacting details of product design or marketing. His extraordinary impact stemmed from his ability to find the right people and build a culture with them.

In Tim Cook’s view: “It was his selection of people that helped propel the culture. You hear these stories of him walking down a hallway and going crazy over something he sees, and yeah, those things happened. But extending that story to imagine that he did everything at Apple is selling him way short. What he did more than anything was build a culture and pick a great team, that would then pick another great team, that would then pick another team, and so on.”

As such, what I found most interesting in the words of Tim Cook is that his observations help dispel the notion of Steve Jobs as an amazing visionary whose heroics spawned his company’s greatness. As is always the case, the success of Apple should be viewed not as that of one extraordinary man but rather as that of the remarkable group and corporate culture he was able to bring together.