The road to self-engagement: we are free to shape our worlds 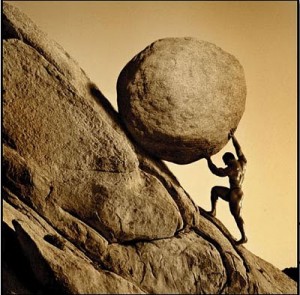 Throughout my career, both in business and as a teacher, I have encouraged people to explore a diversity of subjects in their education, and to seek out a variety of experiences in their lives. One of the ways this all became part of my own story of identity happened during my undergraduate study and work at the Bordeaux winery, which I was describing in the previous post. In fact, I was somewhat surprised by some of the connections I could make between a liberal arts course of study (I was reading particularly history and literature, with some philosophy mixed in) and the physically demanding manual labor of the winery.

As an aspiring scholar of literature and philosophy at that time, I had recently studied the European existentialists at my university course in Paris, and I was particularly drawn to the writing of Albert Camus. By coincidence, during the first weeks of my first summer at the winery, many of my evenings were spent reading of The Myth of Sisyphus, a collection of philosophical essays and reflections that Camus—who would later win the Nobel Prize in literature—had written in 1942.

At the risk of oversimplification, and with apologies to those readers who may have a more than casual knowledge of mythology or philosophy, I offer this quick synopsis of the Myth of Sisyphus—and Camus’ interpretation of it. According to the ancient Greek tale, Sisyphus was condemned for all eternity to push a boulder to the top of a mountain, only to have it roll back to the bottom whenever he reached the summit, obliging him to begin the upward trek anew.

For our purposes, there is no need to elucidate the misdeeds of Sisyphus. Suffice it to say that he was exceedingly out of favor with some powerful gods, who reasoned that there could be no more dreadful punishment than the sort of futile and hopeless labor they chose to assign him.

If classic mythological accounts and interpretations would have us believe that Sisyphus was among the most miserable of mortals, Camus chooses to give this story a divergent twist. He portrays the myth’s protagonist as someone with a clear task, and a sizable challenge. From Camus’ perspective, our quests and struggles—not their outcomes—give meaning to our lives. As such, the struggle to achieve should be enough to fulfill an individual. In the author’s words: “The struggle itself toward the heights is enough to fill a man’s heart. One must imagine Sisyphus happy.”

To attain a somewhat deeper understanding of Camus’ unorthodox conclusion, we should look to his personal philosophical bent.

One of the essential principles of Camus’ version of existentialism is that the human condition is absurd, devoid of any intrinsic meaning. As such, each individual—not society, nor organizations, nor religions—is solely responsible for giving meaning to life, and for living it passionately and authentically. Central to Camus’ notion of The Absurd is the concept that there is no natural form of meaning in the world itself; each of us must take responsibility for giving meaning to our day to day existence.

Existential responsibility, and freedom: One of my explanations for the type of self-engagement that the best workers in the Bordeaux winery—or my driver Otis in Denver—exhibit is that they have recognized their own role in giving meaning to their work and their lives. At one point in his essay, Camus compares the condition of the modern worker to that of Sisyphus: “The workman of today works every day in his life at the same tasks, and his fate is no less absurd.”

According to Camus, Sisyphus can be happy in spite of his plight, or perhaps even because of it. Fully conscious of the absurdity of the world and of his work, he has the freedom to choose his attitude and outlook on it all. He is free to engage fully in his task, to focus passionately on his journey toward the heights, and even to find meaning in it.

To Camus, the absurdity of human existence is liberating; it means that we are free to shape our worlds. We are in charge of our lives and our attitudes. We can live out our fate—however absurd—on our own terms, and define our own forms of meaning.