Flash or fire: what is your game built on?

Flash or fire: what is your game built on?

Flash or fire: what is your game built on?
Posted on July 2, 2018 in Deliberate practice, Influence 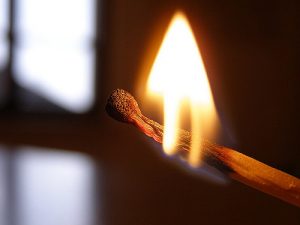 The preceding post, in which I wrote of Michael Jordan’s work ethic and constant will to prepare and improve, caused me to think back to a remarkable Nike commercial from the 1990s.

It is indeed exceedingly rare that I find anything in a television advertisement that reaches viewers on a philosophical plane and strives to impart a valuable life lesson. This advert, entitled “Maybe it’s my fault” is a true exception. In it, we see a series of images from Jordan’s past, from childhood to adolescence to manhood, as we listen to his reflections on the game and his own historic role.

It is a 60-second spot I have seen more than a hundred times, and I have even used parts of it in my teaching and public speaking. When I speak to groups about the question of whether leaders are born or made, I invariably make the point that remarkable achievement in any field is the result of practice and passion, and not the consequence of some natural gift.

Thus, each time I watch this commercial, I am reminded how much its message applies to one of the core concepts I emphasize constantly to my clients and seminar participants. Becoming an effective leader, learning to communicate in ways that inspire others, or attaining proficiency at any activity, is far more about practice and persistence than about innate talent.

It is indeed enlightening to study some of the lines from the advertisement, and to take a deeper look at what this star athlete is telling us. As such, here is a quick look at four of the protagonist’s declarations.

“Maybe it’s my fault. Maybe I led you to believe it was easy when it wasn’t.”

When someone looks as natural as Michael Jordan with a basketball, most of society wrongly concludes that such prowess must be the result of inborn talent. In actual fact, outstanding performance in sport, or in any field, is something that takes years of hard work, attention to detail, and determination.

“Maybe I made you think…that my game was built on flash and not fire.” Here, we find a crucial lesson about leadership. In our modern image-obsessed society, we tend to choose our leaders for the wrong reasons. We are impressed when they are flashy and charismatic; we can easily fall into the trap of following media stars rather than people of true moral fiber. Jordan reminds us that his success was built more on character and determination than on chic or panache.

“Maybe I led you to believe that basketball was a God-given gift and not something I worked for, every single day of my life.”

For me this is the single most powerful and far-reaching statement he makes, and it is indeed the core of his message. What Jordan is telling us is how we can all get better every day, through diligence and mindful practice.

“Maybe I destroyed the game, or maybe…you’re just making excuses.”

Here, Jordan closes by challenging each of us to “Become Legendary”, the two words that remain on the screen as the final image of the spot. These words are certainly not to be taken literally; it is not to say that we should try to do as he did and become legendary basketball players. Rather, he is telling us to reach inside and strive for our full potential, at whatever activity we consider important to us.

In other words, we should not limit ourselves by thinking that becoming great at anything is the result of natural gifts. We can all improve our game every day through practice, attention to detail, and perseverance.

Therefore, my message to people who would like to bring their “leadership game” to new levels, or to truly influence their worlds, is intrinsically similar to that of this advertisement. Rather than make excuses, each of us should accept responsibility for changing the things we long to change, and for becoming the people of influence we can become.