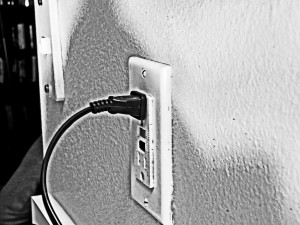 I finished the previous post wondering whether the “always on” devices that power our worlds, and that make modern life so convenient, are not simultaneously diminishing our ability to come up with new ideas. If we spend so little time “unconnected”, if we are never bored anymore, will we lose the capacity and the inclination to explore our own minds? What is the impact of modern technology on our individual—and collective—creativity and imagination?

A quick bit of research led me to the realization that, in a generic sense, these are not particularly new questions. The concept that something is gained—and at the same time something lost—through technological progress predates the computer age. And, the argument that our infatuation with any device can impact our creativity, making us less prone to innovate, has often been advanced in earlier times.

For example, here is a story I read some 20 years ago, in Max Depree’s Leadership is an art (1990), where the author describes the loss of tribal storytelling and group creativity in Nigeria, due to a disruptive technological advance—the electric light bulb.

Electricity had just been brought into the village…Each family got a single light bulb in its hut…The trouble was that at night, though they had nothing to read and many of them did not know how to read, the families would sit in their huts in awe of this wonderful symbol of technology.

The light bulb watching began to replace the customary nighttime gatherings by the tribal fire, where the tribal storytellers, the elders would pass along the history of the tribes. The tribe was losing its history in the light of a few electric bulbs.

The case of television in the United States: One can certainly argue that the Age of Television has also brought about declining levels of creativity and imagination. In the 1950s and 60s, as the television became widespread—and then virtually ubiquitous—in the American home, sociologists began to study its impact on child development and family life.

In the beginning, and somewhat ironically, people tended to see only the potential advantages of this significant innovation, in particular with respect to its “beneficial” influence on the family. In 1949, pundits predicted that television would take over our way of living, change children’s habits, and bring families together around a shared activity. “No survey’s needed, of course, to establish that television has brought the family together in one room,” wrote the New York Times television critic in 1949.

But, the phenomenon of television viewing did not play out exactly as the experts had anticipated, and the effect on family life quickly became more detrimental than favorable. Just as the light bulb did in the Nigerian tribe, the television came to dominate evening activity, and it was soon the focal point of everyone’s attention.

While it was true that a majority of families congregated in one room around the television, the act of sitting together with the novel device did not encourage meaningful contact. On the contrary, television watching tended to reduce opportunities for conversation and  interaction. Family members were not relating to each other; each individual was in a unidirectional relationship with the TV set.

A number of research studies done when television was a relatively new medium demonstrated that TV viewing was interfering with the formation of family relationships. Vast majorities of respondents to questionnaires stated that no conversation ever took place during evening viewing, except at specified times such as commercials. Moreover, more than a third of those interviewed indicated that television watching was the only activity that brought the family togetherduring the week.

In dominating the time families spent together, the television was replacing family rituals, the recurrent games and jokes, the shared activities, the storytelling—in other words, all the things that make a family unique.

Winning the war on boredom: In the age of television, the response to “I’m bored” often became, “Let’s see what’s on TV”. Today, we look increasingly to our smart phone and tablets, and the phenomenon is quite similar. Rather than embrace our quiet moments when there is “nothing to do”, rather than using them to reflect and to look inside our selves, or to engage in a deep conversation, we expect our devices to provide distraction and entertainment.

As such, and for a many decades now, technological innovation has helped us escape from boredom. But, at the same time, it has had a detrimental impact on our ability to imagine and desire to create. Whether we consider Nigerian tribespeople fascinated by electric light bulbs, American families watching television together, or today’s smart phone-addicted individuals, we are talking about people mesmerized by devices. They are certainly not spending much time exploring their inner minds, or sharing their deep thoughts and stories.