The best speeches have elements of improvisation

The best speeches have elements of improvisation

The best speeches have elements of improvisation
Posted on May 30, 2016 in John's reflections, Speaking
0 Comments 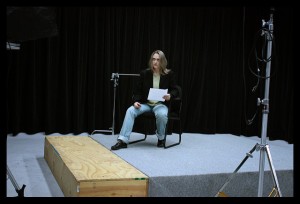 After last week’s post, I did some more reading about Barack Obama’s use of the teleprompter. It turns out that the president almost never speaks in public without his favorite tool, and that he has drawn considerable criticism because of it. Many observers view the use of such devices as a sign of inauthenticity and insincerity, an indication that handlers and speechwriters are always telling him what to say.

During the 2012 primary campaign, Republican presidential candidate Michele Bachmann was so annoyed with Obama’s reading of his speeches that she made a formal pledge never to use a teleprompter. Furthermore, she proclaimed that if she ever did make it to the White House, she intended to ban them entirely.

Just how much does Obama rely on reading words from a screen when he speaks in public? According to the Washington Post, almost every time the president delivers a speech or makes remarks—no matter how brief or mundane—he insists on using twin teleprompters. As such, he addresses every group with his two glass panes at eye level, one to his left and the other to his right, projecting the scrolling text of his prepared remarks.

The advantages of such an approach are clear. Speakers such as the president can deliver the words just as they and/or their brain trust envisioned them. In addition, it allows orators to appear to be talking directly to listeners, eye to eye with their audiences.

These days, though, fewer and fewer listeners are fooled. Mitt Romney, the Republican presidential candidate in 2012 tells a story of running a town hall meeting in Florida during his campaign. As he was wrapping up the session, a woman from the audience paid him the following compliment: “You did all of this without a teleprompter. Good job!”

While the teleprompter has been used by a number of past US presidents—Republicans and Democrats alike—Obama’s extreme reliance on them is truly without precedent. President George W. Bush, for example, used such devices, but only for his most important speeches. According to Bush’s long-time press secretary Ari Fleischer, the former president’s favored style was simply off-the-cuff, facing his audience with a few small note cards to remind him of his line of thought.

For me, obsessive use of such electronic equipment creates a distinct negative impression. Seeing politicians use them makes me long for the days of the truly outstanding speakers—Martin Luther King, Winston Churchill, Abraham Lincoln or Nelson Mandela—people whose approach was closer to what I advocate—standing up and speaking from the heart. I prefer speeches that sound at least in part spontaneous, not words recited from a piece of glass, with phrases that the orator may not even have crafted himself.

Despite my bias against devices that turn speakers into readers of text, I recognize that teleprompters can serve a purpose, particularly in sensitive diplomatic situations, where a word misused or misconstrued could strain relations between nations. In such cases, the precision and accuracy of one’s words are more important than spontaneity. However, in nearly all other contexts, I would say that speakers are best served by preparing and rehearsing only their lines of thought, leaving room for some spontaneity and improvisation around their core themes. In fact, the occasions where I have found Barack Obama impressive have been in relatively casual settings, where his answers and remarks are not unduly prepared and scripted.

During my doctoral study, I examined in some depth the speeches of some of history’s most famous orators, in a number of different cultures. One characteristic that many of them shared was an ability to gauge an audience’s reaction and adapt their discourse to it. They were comfortable ad libbing around their core themes, willing and able to stray from their prepared texts when conditions demanded it.

In fact, I have often said that if Martin Luther King had used a teleprompter, some of his most memorable oratory may never have happened. Dr King often found inspiration in the moment, and at times he showed his passion by altering his wording or his tone to suit the situation. We’ll look at that aspect of his speaking a bit more next time.