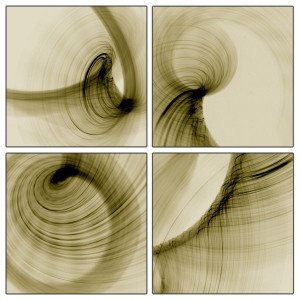 Steve Jobs’ now famous 2005 Stanford commencement address consisted of three brief personal stories, one of which he called “connecting the dots”. In this tale, Jobs explains how his interest in calligraphy came to be, and how it influenced the design of the original Macintosh computer, and subsequently the entire industry.

While still a teenager, Jobs dropped out of Reed College in 1973, after only six months in residence. He explained that he enjoyed the school, but that he was frustrated by the required courses he was obliged to take, many of which did not interest him. After quitting the college, though, he remained on the Oregon campus for another 18 months, sleeping on friends’ floors, and “dropping in” on the courses that interested him.

One of the courses that caught his fancy was calligraphy. He was fascinated by the beautiful posters he saw on campus, with carefully drawn letters that were at the same time functional and visually appealing. So, he learned all about the various typefaces, about changing the spacing between letter combinations for effect, about “what makes great typography great.” He was enthralled by the artistic subtlety of writing letters this way, of the exquisite art forms that science could simply not capture.

While he saw calligraphy as merely a personal interest with no practical application, it would turn out to be “priceless” later on, when elaborate, artistic typefaces were designed into the first Macintosh. As he explained, “If I had never dropped in on that single course in college, the Mac would have never had multiple type faces or proportionally spaced fonts. And since Windows just copied the Mac, it’s likely that no personal computer would have them.”

Jobs’ underlying point is one that I have always found appealing, and one that I have long endorsed: We should seek diversity in what we study and experience in life, as having a variety of dots to connect will foster creativity.

The basic premise of this story reinforces my core belief in the value of a varied, liberal arts style of education. The more we follow our intuition and expand our intellectual horizons, the more “dots” we have to connect. A broad and varied life and learning experience cultivates an inquisitive mind and an ability to put everything in a larger context. In addition, exposing oneself to a wide variety of subjects and approaches encourages us to make links between elements that might seem quite dissimilar.

While I am not presumptuous enough to compare my story to that of Steve Jobs, there is a common thread to our experiences as young college students. Both of us found insight and inspiration by connecting things we had learned in seemingly unrelated fields. As such, an interest in the artistry of calligraphy would influence the future Apple CEO’s vision of what computer design should be. In my case, reading philosophy and literature would shape, in significant and lasting ways, my views on worker engagement and employee-management relations.

As I reflected on these types of connections recently, it brought to mind a debate that seems to resurface periodically, about the best form of education for today’s world.

In 2011, Microsoft co-founder Bill Gates made an impassioned speech to US state governors, calling for more investment in Stem subjects (science, technology, engineering and mathematics). The Microsoft co-founder espoused the view that the US was falling behind other countries in these fields, which were “well correlated to areas that actually produce jobs”.

The same week that Gates spoke to the governors, Steve Jobs took to the stage for one of his renowned product launch “shows”, in this case the second iteration of the iPad. His speech expressed a contrasting point of view to that of Gates. Apple’s leader argued against schooling that focuses too narrowly on science, math, and technology. “It’s in Apple’s DNA that technology alone is not enough,” he stated. “It’s technology married with liberal arts, married with the humanities, that yields us the result that makes our heart sing.”

As I have said on several occasions previously, it was fortunate that I was reading philosophy as I experienced the world of winery labor as a young university student. Had I not had that “dot to connect”, I may have fallen into a routine of simply performing the tasks in front of me and earning my pay. Seeing it all through an existential lens pushed me to search for a deeper sense of meaning and engagement, and to reflect on management issues in ways that would later prove invaluable.