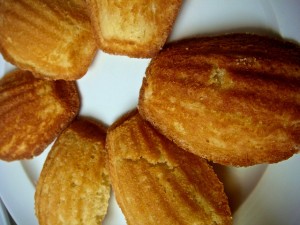 One of the master works of the 20th century, and one of my personal favorite novels, is À la recherche du temps perdu, a seven volume tour de force by French literary giant Marcel Proust (1871–1922). In English, it exists in two translations, each with a vastly different approach and end product: In Search of Lost Time and Remembrance of Things Past.

Early in the novel, the narrator states that he once had few memories of his early childhood weekends, which he spent at the home of his aunt Léonie in the village of Combray. In fact, the memories of Combray and his aunt had lain dormant for many years, until one day when the taste and scent of an ordinary madeleine cake dipped in warm tea made him nostalgic.

All of a sudden, and seemingly out of nowhere, he remembered eating similar madeleines dipped in tea as a child. In fact, it was precisely what his aunt Leonie gave him when she awoke each Sunday morning. When he tasted these cakes as an adult, served in the same way his aunt had done, it awakened a veritable flood of remembrances, involving his early life and a variety of people he had encountered in Combray. In the end, there were enough intense memories and stories to nourish thousands of pages, which would blossom into one of the truly classic novels of all time.

The narrator writes that, when he tasted the madeleine dipped in tea as an adult, he immediately had a sense of something unusual occurring. As he describes: “No sooner had the warm liquid mixed with the crumbs touched my palate than a shudder ran through me and I stopped, intent upon the extraordinary thing that was happening to me.”

For those familiar with the madeleine—a common traditional French cake—it may come as somewhat of a surprise that such a plain and unexceptional commodity should trigger a gushing deluge of memories, one that would fill seven long, elaborate, serpentine volumes of magnificent writing.

What I find particularly fascinating in Proust’s madeleine story is that it is probably the most colossal incident of involuntary memory ever described. Had he not encountered these same cakes as a adult, with precisely the smell and taste reminiscent of those he ate in Combray on the Sundays of his childhood, the entire phenomenon of À la recherche du temps perdu would probably never have existed.

So, what is the connection between the writing of Marcel Proust and my life, the coaching I do, or the topics I write and teach about? Quite simply, both his work and mine have a similar notion of unconscious recall at their foundation.

Admittedly, examples from my life may lack the grandeur of Proust’s madeleine episode. Nonetheless, his type of involuntary memory is an occurrence I have experienced hundreds of times when working with clients. In nearly every case where I have worked with people on the deep exploration of their life journeys, in our efforts to identify and clarify the sources of their deepest convictions, involuntary recall has played a significant role.

One of the reasons that the methodology I have developed for heightening an individual’s self-knowledge is such a powerful tool is that it makes effective use of involuntary recall. In fact, it is a two-pronged, iterative process that calls upon both voluntary and involuntary memory.

With every client, we begin squarely in the domain of voluntary recall, as we do exercises designed to explore an individual’s life journey, actively recalling the people, events, decisions, and environments that have influenced their values and beliefs. At the same time, this conscious process always unearths triggers that cause people to revisit past events or people in their minds, many of which may have been “hiding” far below the surface of their conscious thinking.

My interest in Proust, madeleines, and involuntary memory was rekindled recently by my own realization that much of what I have been thinking and writing these past weeks is a direct result of a seemingly random event, but one that became a trigger for an unusual incident of involuntary recall.

It all happened in Denver, on my shuttle to the airport with Otis (see my post from January 29). And, it was something this van driver mentioned in passing—that association leads to assimilation—that brought me back to the Bordeaux winery of my university days, causing me to recall events, environments, names and faces that had been long forgotten.