F.C. Barcelona and the value of identity

The following post is from Eduardo, our student, research assistant and friend.  I find it very well written, and he makes some interesting points.  One thing we should all realize when we read this piece is that Eduardo is Spanish, and a lifelong fan of Real Madrid, not of Barcelona.

So, it all evokes some interesting questions: Is Barcelona staying closer to a set of traditional team values, where Madrid may be drifting away from theirs?  In football, are style, values, a team culture and beauty of play important, or is it all about the substance of winning?  When we are children, we are taught that it is “how you play the game” that should mean the most.  What do you think? 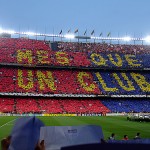 True Success comes from within and cannot be bought

F.C. Barcelona and Real Madrid are two of the most powerful clubs in world soccer. Both teams have a history filled with trophies, fighting for dominance both in Spain and in Europe. This Saturday, both teams will face each other at “el clásico” match in front of nearly ninety thousand people at the Santiago Bernabéu stadium in Madrid. Surprisingly, Barcelona comes into the match with an eight point lead over their eternal archrivals.

In recent years, Barcelona has dominated Real Madrid, winning various Champions Leagues and consistently defeating them in their domestic league. In 2009, Barcelona won a record five titles and in their last match, the Catalan team beat Real Madrid by a whopping 5-0. This is surprising, given that Real Madrid is blessed with the highest budget in world soccer. In the last few years, the team from the Spanish capital has signed some of the biggest stars in the game such as Cristiano Ronaldo, Kaká, or Xabi Alonso. How could underperformance be so consistent?

F.C. Barcelona has done an exceptional job of understanding and transmitting that it is “més que un club” (more than a club). By having an authentic understanding of who they are and what they want to achieve, the team shares a story that brings them together and makes them understand their common goals. At the moment, Pep Guardiola (the coach) and eight players on the Barcelona starting eleven have been trained in the lower divisions of the club. They have lived and breathed the Catalan team’s story from a very young age.

Real Madrid has a very different strategy. At the moment, only one player on their starting eleven comes from their lower divisions, the goalkeeper Iker Casillas. The club consistently buys the most popular coaches and players from around the world in a desperate effort to win trophies. There is insufficient discussion whether these individuals, their history and their values are a good fit for Real Madrid.

Because of years of F.C. Barcelona dominance, Real Madrid has started to put winning above values and identity. The club is forgetting to understand its true nature and the story that could bond them together. Having the highest revenue in world soccer is important, but it means nothing without substance! When a team loses its core message and values, it will not be successful because true success comes from within; it cannot be bought! No matter how much Real Madrid concentrates on creating buzz with marketing, if it loses itself, it will continue to lose on the pitch.