How Martin Luther King Jr. came to tell the world about his dream 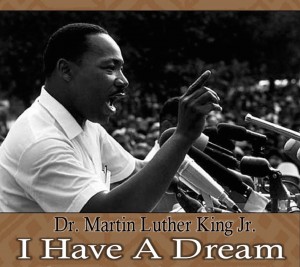 As I wrote last time, if Martin Luther King had stuck to his script for the March on Washington in 1963, the audience—and the rest of the world—might never have discovered his dream. Here is how it happened:

The crowd waiting in the warm sun on August 13th was by far the largest Dr King had ever addressed: a quarter-million people stood before him as he strode toward the stage at the Lincoln Memorial. They had come there from near and far, for the March on Washington, for Jobs and Justice, and to listen to King’s much anticipated speech.

King began slowly and deliberately, scanning his notes and reciting his well-rehearsed text. Soon, though, as he looked over the sea of faces, black and white, famous and obscure, he could feel that his words were not working their hoped-for magic.

By most standards, the March was already a great historical success, having attracted one of the largest crowds of all time. But King was not concerned about making history; he was trying to stimulate true change. And his prepared text, so carefully crafted, was somehow feeling far too static. Looking out at the audience, King understood that he had to change course in order to connect with his listeners. So, he began to ad lib, searching within himself for words and images that would energize the crowd.

The third-generation pastor had spoken often about his dream before, and the gentle push from Sister Mahalia was just what he needed to put him on this track again. King quickly found his true voice and began speaking from the heart, about an America better than its racially-torn reality. The words that the entire world would remember became achingly personal: “I have a dream that my four little children will one day live in a nation where they will not be judged by the color of their skin but by the content of their character. . . I have a dream today.”

Hearing the simple phrase, “my four little children”, listeners could see their own children in their minds. Then with great restraint, King reminded listeners that his youngsters lived in an America where black children were treated differently—and far worse—than other children.

King had experienced first-hand the horrors of the segregated American South. But this was not the day to talk about “Whites Only” water fountains or other injustices. This was not a day to speak to the staunch activists; this was a day to awaken and recruit the uncommitted.

To launch the change he envisioned, Reverend King needed to reach out to the masses. He knew that President Kennedy and other wielders of power would be watching on television, or would read about the March in the following day’s papers. He wanted to persuade the powerful, but he also wanted to reach all the decent people who were not yet engaged. And to do that, he knew he had to weigh his remarks with great care.

Martin Luther King could express righteous wrath as well as anyone. For example, he once thundered before a mostly black activist audience: “Discrimination is a hell-hound that gnaws at Negroes in every waking moment of their lives to remind them that the lie of their inferiority is accepted as truth in the society dominating them.”

But this was not a day to talk of hell-hounds. King’s overriding goal was to begin to rewrite his nation’s narrative—from one of racial separation to one of inclusion.

As he had done on other occasions, Dr King could have described the sadness on his children’s faces when he told them only whites could go to the local amusement park. He could have recalled the pain of explaining why a cross was burning on their lawn. But this was not a day for negative images from the past; it was a day for dreaming of a better future.

With its combination of soaring rhetoric and clearheaded restraint, King’s address that day is widely recognized as a masterpiece. Had he not chosen to depart from his tightly polished script, it surely would have been far less so.