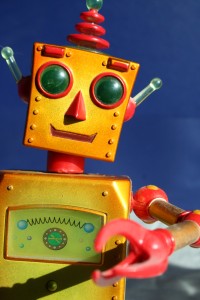 This week, I had planned to write something more about Martin Luther King, a reflection on how he progressed as a leader by learning to speak from the heart around a few core themes. Rather than using a teleprompter or reading from a paper, his best moments—instances of true personal growth and impact on his audiences—came when he deviated from “the script” and let his thoughts run free.

However, I then received further information that showed to what extent how presidential candidates and public officials have become so tightly controlled and scripted in what they say these days. The incident that a friend pointed out to me—and the related videos I subsequently found—involve two former Republican presidential hopefuls: Florida senator Marco Rubio and Governor Chris Christie of New Jersey.

So, here is yet another small foray into political commentary, beginning with my usual caveat: I write of these things purely because of my interest in rhetoric and public speaking. My goal is not to criticize or defend any politician—Obama, Rubio, or Christie in this case—but rather to say something about the current state of public discourse.

In two recent posts (May 20 and  May 30), I addressed the tendency of modern political candidates to be extremely static and scripted. Much of my focus in those pieces was on the drawbacks of using a teleprompter. As we saw, and will continue to discover when I write more about the example of Dr King, it is almost always in moments of improvisation that speakers show their true passion. When orators are busy following a script, we do not feel the essence of the individual behind the words.

Alas, some of the coverage of candidates that I have come across in the past few weeks has emphasized to me that the teleprompter and electronic speaking aids are only a piece of the problem. The incident between Christie and Rubio that I referred to above reveals that there are other ways to avoid any risk of straying from one’s core message. In this particular case, Mr Rubio simply memorizes and recites one of his key messages, over and over. The problem with this approach is that the candidate begins to sound robotic, over-rehearsed, and unable to improvise.

In a remarkable exchange between the two presidential hopefuls during a televised debate, Mr Rubio made this statement: “Let’s dispel once and for all with the fiction that Barack Obama doesn’t know what he is doing; he knows exactly what he is doing. Barack Obama is undertaking a systematic effort to change this country, to make America more like the rest of the world…it is a systematic effort to change America. When I am president of the United States, we are going to re-embrace all of the things that made America the greatest nation in the world…”

When Christie responded with an aggressive attack, calling Rubio an inexperienced legislator whose greatest asset seemed to be an ability to deliver memorized rhetorical flourishes, repeating his talking points over and over like a robot. Responding to Christie—and proving his assailant’s point in an astonishing manner—Rubio turned the focus back to Obama, reciting nearly verbatim the same prepared line in which he slammed the current president for setting the United States on a declining path.

After this surprising exchange between the two candidates, I understood—at least in part—what many voters seem to find so new and refreshing about the now Republican nominee, Donald Trump. While I wish neither to defend nor to attack Mr Trump, or any other candidate for that matter, one must admit that there is something fascinating about his emergence on the American political stage.

Say what you will about him, Trump is anything but scripted. In fact, his unpredictability is one of the characteristics his detractors criticize most. One never knows, his critics state, what he may proclaim from one minute to the next. Indeed, sometimes his words today appear to contradict a stand he took one week, one month, or even one day ago.

In a strange sort of way, though, the rambling and erratic nature of his discourse may be part of Mr Trump’s appeal. He is all about improvisation and speaking off-the-cuff with few notes or prepared remarks. He shoots from the hip, at times recklessly, in a world where every other candidate seems overly cautious, guarded, and risk averse.