No slides? No talk! 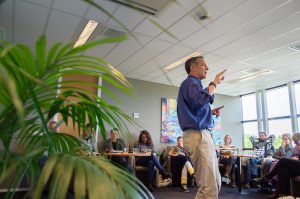 At the end of the previous post, I referred to the fact that I have some personal anecdotes from my public speaking experience, cases that demonstrate the pervasiveness of slides in the world professional presentations. In fact, there are quite a few occasions where organizers of an event flatly refused to allow me to address an audience without sending my PowerPoint presentation in advance.

Of course, I would like to be clear, once again, that I have nothing against PowerPoint per se. What surprises me sometimes is the expectation that every presentation will involve a certain number of slides, even in venues where I would welcome the freedom to address the listeners in a way that I consider more appropriate, and indeed more effective.

One example that sticks in my memory occurred as I was preparing to speak at a conference in Mexico several years ago. The theme of my two-hour session was “how leaders motivate their teams in times of crisis”. Having made speeches on this or related topics more than 50 times, I had already experimented with a variety of approaches in different circumstances.

Coincidentally, I had spoken on a similar subject just a few weeks earlier, to a group of top managers at Scotia Bank in Lima, Peru. With the bankers, my presentation was in the context of one of the “learning breakfasts” that the company organized regularly. As such, the venue was a small, elegant dining room in an upscale hotel, with about 25 people present.

Since there were no specific guidelines about how I should organize my talk for the bank, I chose the format I felt would work best—a single slide showing the four lessons I wanted the audience to remember. Using the screen sparingly, I simply highlighted each point, elucidated it briefly, and then told relevant stories from my personal experience, or from my research in the field.

As is obvious to people who know my work or read this blog, I am a true believer in the power of storytelling, and I have seen it work in a wide selection of venues. In Lima, the minimalist design—making each of my key points quickly and then supporting it with stories—worked even better than I had hoped. At the end, the bankers were so enthusiastic about the impact of my anecdotes that I decided to try something similar at the Mexican conference.

Despite the dissimilarity of the two venues—one an intimate gathering of 25 people, and the other a large amphitheater for several thousand—I was confident that I could make the “single slide and story” format work in Mexico. Two weeks before traveling to Mexico, though, I received an email from the organizers of the event, asking me to please send them my “PowerPoint” well in advance. My reply, that I planned to show a single slide and tell stories around my 4-5 central concepts, was met with surprise and consternation. As such, I was told in no uncertain terms that the attendees expected to see slides, and that my screen shots were to be printed in a booklet, to allow the participants to follow along.

So, rather than attempt to convince the people in charge that I wanted the listeners to focus on my stories more than on a printed booklet, I did capitulate somewhat in the end. I say “somewhat” because I used 10 slides, far fewer than any other speaker, and I was able to accomplish most of my goals.

Once again, I wish to emphasize my intent in recounting this small anecdote—as one of many examples where someone imposed a particular use of slides on me when I would have liked to do something less rigid. It is certainly not to criticize the people who make such demands, but simply to comment on the widespread assumption today that any and all presentations are to be done with PowerPoint.