How Mandela used rugby as a unifying force 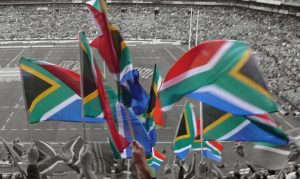 As we referenced in the previous post, Nelson Mandela’s term as chief executive of South Africa began with a political crisis concerning the future of the national rugby side. Specifically, the president’s desire to preserve the Springbok as the team’s mascot faced violent opposition from the National Sports Council.

Though most members of the Council were in fact loyal adherents of Mandela’s own political party, not many were convinced of the wisdom of keeping an emblem that reminded blacks of their suffering under decades of apartheid. As such, they were taking great satisfaction in the symbolic act of voting unanimously to make the king protea the only authorized symbol for all national sports teams.

For Nelson Mandela, though, this whole affair was far more than a question of sports and mascots. Keeping the Afrikaners’ favorite game and symbol were an integral element of his plan for a reborn nation—one where blacks and whites would work together.

In an unprecedented and entirely unexpected move, President Mandela journeyed unannounced by motor vehicle to the National Sports Council meeting. Upon receiving news of the Council’s decision, he immediately made it his personal mission to visit them in person. By his way of thinking, he simply had to go himself, to convince the members that voting the Springboks out of existence was a grave mistake.

He moved swiftly, and as such arrived not long after the decision to ban the Boks had been taken. In a direct challenge to the Council, he recommended that they see a larger picture and reconsider their vote.

There was a real possibility, he told the raucous crowd, that if they reversed their decision and allowed the Springbok to continue as symbol of the rugby side, they would see the country united as never before. On the other hand, banning the Afrikaners’ best-loved emblem would severely hinder the dream of building a rainbow nation, where people of all races could live in harmony.

To those blacks who wanted to bury the Springboks with the other skeletons of the apartheid regime, Mandela sketched out his picture of a better future, one where the traditional emblem of rugby could be a source of pride for all South Africans. Indeed, by the president’s reckoning, Springboks rugby could become a cornerstone element of their strong and fully integrated land.

In his effort to convince the group, Mandela spoke of his years in prison and what they had taught him about the Afrikaans culture and mindset. On Robben Island, he said, he had learned to see the world with new eyes, to appreciate the human side of his white jailers, and to understand the role they could play in South Africa’s future.

Though the recently elected president spoke forcefully and eloquently, his message was not well received by all present at the meeting. In the end, a new vote was taken, and the controversial emblem was reinstated, but only by the slimmest of margins.

While there is more to tell about precisely how President Mandela prevailed as protector of the Springboks, I will let that tale sit for now and perhaps come back to it later. As we have discussed previously, though, Mr Mandela’s plan for using rugby as a unifying force had several components, and these other aspects merit some discussion as well.

Other than crafting a new story for Springboks and convincing blacks of the value of preserving the emblem, Mandela looked to befriend the rugby team. As we will see in subsequent posts, this was no easy task, since he had little knowledge of the game.

The third element of Mr Mandela’s project of unification was to be the teacher who could demonstrate to the black community the value of supporting “the white man’s sport”.

As he did when he saved the symbol of the Springboks, Nelson Mandela approached these two other parts of the plan with similar levels of energy and personal engagement. Next time, we will take a closer look at what he was able to achieve in this arena.