How Nelson Mandela began a new story for South Africa 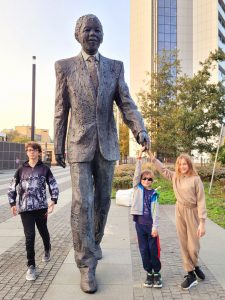 The previous post gave a brief description of Nelson Mandela’s first hours as President of South Africa. Many of the white government workers he observed that morning were busy packing away their personal items, in anticipation of being relieved of their functions.

A majority of the government workers President Mandela walked past in the corridors leading to his office were typical of the nation’s white population. They feared that the post-apartheid world would be exceedingly hostile for them. In fact, most officials who had worked for the previous administration assumed that their nation’s first black president would move swiftly to replace the whites with loyal members of his own race and political persuasion.

As such, when Mr Mandela encouraged the whites to lend their services to his new government, the overwhelming attitude was one of both surprise and suspicion.

One can readily understand why whites were dubious. In the era of apartheid, from 1948 through the early 1990s, there were few good stories of black and white collaboration. Generally, racial relations in South Africa had been an enduring chronicle of separatism, hatred and violence.

Of all the whites, perhaps the most skeptical were the “Afrikaners”, an ethnic group descended from the original Dutch settlers. They are an independent lot, particularly proud of their ancestors, the intrepid adventurers who journeyed to the Cape of Good Hope in the 17th and 18th centuries.

The Afrikaners made up only about 5% of the population, but they had dominated the political and commercial landscape of South Africa from the time of white settlement until the first free elections in 1994. Their mother tongue is not English but Afrikaans, which is derived from the colloquial parlance of South Holland.

Nelson Mandela had come to know the Afrikaners and their culture during his long incarceration. For 27 years, it was their language he heard around him each day, among the guards, supervisors and other prison officials who kept close track of him.

On Robben Island, in particular, all of the future president’s jailers were Afrikaners. Early in his imprisonment, Mandela set out to study them. At first, his quest to understand Afrikaners was about “knowing the enemy in order to prevail against him”, a strategy he had learned years earlier as a boxer.

Thus, early in his tenure as a prisoner, Mandela decided to pursue the goal of mastering the language of his oppressors. Eventually, he learned to read their books and recite their poetry. He surprised and engaged prison staff members by soliciting their help in his linguistic endeavors.

Little by little, Mr Mandela came to understand the importance of this sort of contact. By respecting his guards, by honoring their language and their traditions, the future president was able to turn his personal situation around, eventually winning over his warders.

In the final years of incarceration, numerous prison officials treated Mandela as if they were loyal friends. Christo Brand, who served as one of Mandela’s wardens for 18 years, would later tell stories of how he and others came to quietly bend the rules for their renowned prisoner.

Mandela would say after his release that the prison experience taught him the power of persuasion and negotiation, tools that would later help win over skeptical whites, often in their own language. In fact, he came to consider speaking the language of one’s partner or adversary as an essential asset in any deliberation. As he would famously declare, “If you talk to a man in a language he understands, that goes to his head. If you talk to him in his language, that goes to his heart.”

Learning the “language of the oppressor” was merely one element of Nelson Mandela’s remarkable personal journey during his incarceration. He would later declare that it was his experience as a prisoner that allowed him to realize his true potential as a man and a leader. It also helped him set South Africa on the path toward a true transformation.