A hiring lesson from American football 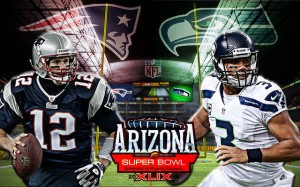 This week has been an unusual one. I have been in the US for over two weeks now, to take care of some of my business here, and to attend two board meetings. It was already planned as a period full of activity, with visits to family and friends squeezed in among the rest.

Of course, as some of you know, I had not planned to stay nearly this long, but then the weather took a bit of a wild turn, as does sometimes tend to happen in New England.

I was staying at my parents’ house in the town of my birth, Worcester—a city of some 180,000 people in the middle of the state of Massachusetts. An enormous snow storm, the largest in our town’s history in fact, dropped over a meter of snow in less than 24 hours, on Tuesday and early Wednesday. Travel came to a complete halt for more than two days, and air transportation was so backed up that I was forced to find a convoluted itinerary back to Europe, arriving on Friday—three days later than planned.

In any case, I was on my own for two days in my parents’ house, as the storm shut virtually everything in the region down. For about 36 hours, there was a complete travel ban; some who ventured out in their cars were even arrested.

On the news reports throughout the area, there seemed to be only the same two over-hyped stories, over and over: the “Snow Apocalypse” and the Super Bowl. And, since I left the television or radio on most of the time, at least in the background, to follow the path of the storm and recovery, I had an up-close and personal view of these two forms of hype.

In some ways, it really was fascinating to see it all. As someone who has spent most of my life in Europe and Latin America for the past twenty years, I tend to forget that nobody does marketing and hype quite like the Americans.

Thanks to American marketing skill, the Super Bowl has become a worldwide event, and certainly the most watched single game in American sports. One of the reasons for the extraordinary hype I experienced this year was related to my location close to Boston. The local NFL (National Football League) team, New England Patriots, are one of the participants in this highly publicized final, so the local fans and media have been in a literal frenzy since the semi-final 10 days ago.

While I am far from an expert in American football, I listened to enough broadcasts about the upcoming Super Bowl to know something about the key players who will take the field on Sunday. As is often the case, much of the media attention has focused on the two quarterbacks, Tom Brady of New England and Russell Wilson of the Seattle Seahawks.

For those who know little about this uniquely American pastime, perhaps even less than I know, the quarterback is critical to a team’s success. Though not always the top star of the group, he is the leader of the offense, the one all others depend on. He is most often the player to make the split-second tactical decisions in the heat of battle.

This year, the two opposing teams and their respective quarterbacks have very different approaches to the game, and very different cultures, but what intrigued me in the reports I heard about the two men was something that they have in common.

While both Brady and Wilson were reasonably good performers in at the university level, neither was considered as destined for stardom in the professional league. Each was seen to be entering the league with some major flaws, Brady for his lack of mobility and relatively slow arm speed, Wilson for his small size and the inconsistency of his passing. As a consequence, neither man was drafted in the early rounds when all the teams met to choose their new recruits. In each case, various other quarterbacks were preferred to Wilson and Brady. These others were seen to possess the better skills and physical attributes that would lead to success as professionals.

In other words, Wilson or Brady were far from perfect matches for the written job description, and that is why I find their stories so interesting.

Brady, in particular, was chosen in the sixth round of the new player draft, with the idea that perhaps he would make a reliable substitute. In fact, the only reason he got a chance to play in the series of important games that would launch his career was an injury to New England’s first choice quarterback. Today, at age 37, he is widely recognized as one of the most successful ever to play his position.

If neither Brady nor Wilson had the classic physical characteristics to fit the job description, each has since overcome his limitations and become an outstanding performer, mostly through hard work, grit, character, and deliberate practice. Each has worked hard to develop his leadership potential, to be a positive force in the clubhouse, and above all to elicit outstanding performance from his teammates.

Though the Seahawks and Patriots have vastly different systems, styles and approaches to the game, each team has a quarterback whose great strength has been an ability to adapt to his context, and to help build a culture of true teamwork and shared responsibility.

So, where is the lesson in all of this? One of the things I came to believe when I did a lot of hiring for my own businesses, or when I helped my clients make people decisions, is that we should hire more for attitude and character than for skill.

I have long advocated spending a lot of time in the hiring process, in order to judge an individual’s desire to learn and grow, to become part of a team culture, and to help develop others. While it is certainly easier to choose our employees based on the demonstrated skills they bring to the job, the “intangible elements” cited above often prove far better indicators of future success. This year’s Super Bowl quarterbacks provide us with two clear examples.