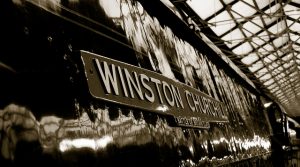 As I mentioned last time, my plan for this week was to amplify the discussion of the remarkable ways that Nelson Mandela processed the experience of living in prison for 27 years. After that, my thought was to go on to other examples that shed light on one of my core principles: We can all learn to use our life experience and our identity stories to influence our worlds.

While these are subjects I will return to soon, two recent occurrences in my own life caused my reflection to move in other directions. The first was my quick trip to the US and what I learned in the time that I spent with one of my clients there. The second event was watching the movie Darkest Hour, which I saw on my return flight to Europe.

Both of these incidents seemed to merit immediate commentary. In addition, there is a connection between them, since each one shows—in its own way—the importance of practice for any orator who seeks to inspire others.

Let’s begin with the film Darkest Hour. It is not often that I watch anything at all on overnight flights, but seeing this choice on the program drew my attention, for two reasons. First of all, I like history, and I lean heavily toward works of this type in my personal reading and viewing.

My second motive for watching the film was professional curiosity. Since my research in the 1990s, I have studied and used the example of Winston Churchill on numerous occasions. He is simply a master craftsman, someone whose attention to detail in planning and practicing his words is one we would all do well to emulate. As such, I was hoping to see somewhere in this story a scene that portrayed his methods for polishing and rehearsing a speech.

Throughout the war years, Churchill addressed the British nation directly, in a series of radio speeches that are widely recognized as some of the greatest in history. Many historians have stated that his words were instrumental in giving the people the strength and resolve to win the war.

Winston Churchill’s radio addresses and presentations to Parliament were true works of poetry, with their inexorable cadence and use of repetition for emphasis. Here is one renowned and often-cited example, from an appearance in the House of Commons on 4 June 1940:

“Even though large tracts of Europe and many old and famous States have fallen or may fall into the grip of the Gestapo and all the odious apparatus of Nazi rule, we shall not flag or fail.

We shall go on to the end, we shall fight in France,

We shall fight on the seas and oceans,

We shall fight with growing confidence and growing strength in the air, we shall defend our Island, whatever the cost may be.

We shall fight on the beaches,

We shall fight on the landing grounds,

We shall fight in the fields and in the streets,

We shall fight in the hills;

We shall never surrender.”

Such discourse would lead commentators to state that Churchill “mobilized the English language and sent it into battle”. The prime minister was also famous for his quick wit, his humor, and his capacity for spontaneity in the moment.

Perhaps because of his sublime use of words in such a wide variety of contexts, it would be easy for one to conclude that he was a natural speaker, with a rare gift for using language. In fact, nothing could be further from the truth.

The key to this master orator’s prowess was not a “gift” but rather the countless hours he spent planning and writing his verbal communication. According to Daun Van Ee, co-author of Churchill and the Great Republic, the man worked tirelessly and passionately at finding exactly the words, the rhythm, and the cadence that he wanted. Churchill visualized the tempo of each speech as he practiced it aloud; he understood that the inflection and energy of the delivery can be as important as the message itself.

So, while I did enjoy the film itself, I was disappointed that we never see the prime minister in the act of preparing and rehearsing one of his speeches. Since my years of study and practice have shown me that deliberate practice is the only path to true oratory success, I am somewhat concerned that this portrayal of Winston Churchill may contribute to the false perception that he was a “born communicator”.

Next time, we’ll look at the New York client I referred to above. Though he has made quite a lot of progress since we started working together, he would do well to emulate the determination of Sir Winston.