A tale of socks and shoes

A tale of socks and shoes

A tale of socks and shoes
Posted on July 19, 2018 in Deliberate practice, Influence, Storytelling 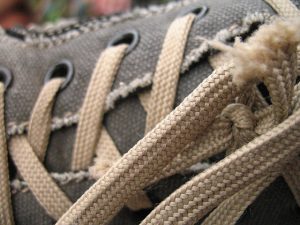 When I wrote last time about sports coaches who focus relentlessly on the fundamentals of their craft, it reminded me of an amusing and revealing anecdote about legendary basketball coach John Wooden.

In the United States, Wooden is one of the most revered sports personalities of all time, as well as one of his game’s most decorated coaches. His teams at the University of California Los Angeles achieved a level of success in university competitions that has never been matched. In his twelve years as head coach, UCLA won ten collegiate national championships, including a record seven times in a row between 1967 and 1973.

The story I wish to relate here involves something that the coach did with each group of new players, on the very first day of practice. It is a somewhat unique occurrence that has been described to me by several people who knew Coach Wooden well, including one of his former players. Though their versions do have small differences, the core elements of the tale—along with its message and impact on the listeners—were always the same.

John Wooden was affectionately called The Wizard of Westwood, in part out of respect for his legendary ability to communicate and teach. As such, the first practice session was an event full of excitement and anticipation. The group of highly skilled new recruits wondered about what astute pearls of wisdom, secrets of the game, or life lessons their famous leader might impart.

Rather than great words of wisdom on that first day, though, Wooden liked to begin by asking the players to remove their shoes and socks. As his new participants looked at each other in disbelief, the coach would state in a serious tone that he wanted everyone to watch a demonstration of how to put on their socks and tie their basketball shoes. Not wanting to question a leader of such impeccable character, they all did as he asked, and then sat barefoot awaiting his instruction.

The coach would then sit himself down on one of the locker room benches. As everyone observed him attentively, he would declare: “I am going to show you the proper way to put your socks and shoes on.”

Each day, when you pull on each sock, he explained and demonstrated at the same time, make absolutely sure that there are no wrinkles or gaps. Your heel should sit fully in the heel of the sock. Run your hands from the toes to the heels to smooth out any bumpy places. Then, he would show each player how to properly lace his shoes and tie them snugly, so that there was no room for the shoe to rub, or for the sock to bunch up.

As one might suspect, at this point players were perhaps wondering what their coach could possibly be doing. Why was he starting out the season by talking about shoes and socks? Here they were, some of the best schoolboy players in America, young men who already had sizable experience dressing themselves for basketball, and this legendary figure had just spent more than 30 minutes explaining the ins and outs of socks and sneakers.

Next, as the players looked on in amazement, Coach Wooden would stand up. With a glint in his eye, he would begin his explanation. If there are wrinkles in our socks or our shoes aren’t tied properly, he elucidated, we may develop blisters. With blisters, some players might have to miss practice. When we miss our preparation time together, we may not be ready to play our best on the game day. And, if we don’t play at our best level, we may not win. All because we did not pay proper attention to how we put our socks and shoes on.

In one of the versions told to me, nothing else happened at that first practice. The day’s lesson was purely and simply about shoes and socks, nothing else. Coach Wooden made just this one point, and then he sent the players home.

Of course, this legendary tale is about far more than socks and shoes. So, we’ll take a look at its deeper meaning in the next post.