An enlightening illustration of the power of narrative for memory

An enlightening illustration of the power of narrative for memory

An enlightening illustration of the power of narrative for memory
Posted on November 11, 2019 in Storytelling 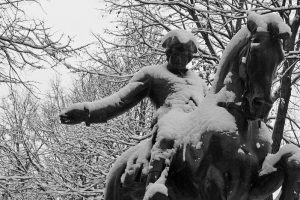 Not long ago, I was listening to an interview with the renowned astrophysicist Neil deGrasse Tyson. Before getting to the true subject of the podcast, Tyson and the host were engaged in a freewheeling discussion on a variety of subjects, including Van Gogh’s painting “Starry Night” and Longfellow’s poem about Paul Revere’s legendary ride through the streets of colonial Massachusetts.

At one point, the astrophysicist asked a question that brought me back to my ongoing reflection about the relationship between story and memory. In fact, I have wondered myself about the very person in Neil deGrasse Tyson’s query. In essence, he asks, what is it that causes us to remember such a minor historical figure as Paul Revere, who played but an exceedingly small role in America’s war for independence?

Of course, non American readers may know little or nothing about Mr Revere’s night of fame in 1775. On the other hand, I would venture to say that virtually everyone whose formative years included schooling in the United States is capable of repeating many elements of this man’s legend, often in great detail. In fact, this silversmith whose role in the American Revolution was not at all major has remained a household name in the United States for more than 243 years.

Neil deGrasse Tyson makes the point that there is no other war in the entire history of the world where one of the truly emblematic characters of the war is someone so mundane and incidental to the fighting. That observation started me thinking about why the memory of Paul Revere remains so alive in the minds of his countrymen. And, as is often the case, it has a lot to do with narrative, with the actual telling of this man’s tale.

Indeed, most Americans can recite the story of what Paul Revere did on a particular night of April 1775 for one simple reason—they learned it in school, in the form of a dynamic story.

Listen, my children, and you shall hear
Of the midnight ride of Paul Revere,
On the eighteenth of April, in Seventy-Five…

So begins “Paul Revere’s Ride”, a 994-word ballad written by the poet Henry Wadsworth Longfellow, which was first published  in the January 1861 issue of The Atlantic Monthly.

To me, it is already a remarkable phenomenon that Mr Revere’s story was being told at the time of Longfellow’s writing, some 85 years after the fact.

Other than his famous midnight jaunt on horseback, Paul Revere’s life and career were certainly not the stuff of legend. A prominent silversmith in 18th century pre-revolutionary Boston, Revere was a staunch patriot, at a time when many denizens of the American colonies remained loyal to the English motherland. As such, he helped organize a secret intelligence and warning system to keep watch on British military movements.

It was indeed Revere who began the midnight ride to alert the inhabitants and the other horsemen, but he was far from alone. Historical accounts say that he was joined by two companions, and the three of them were charged with informing some 40 other riders. The individuals took various routes through the farmland that is now suburban Boston, alerting the citizen militia that British forces were approaching.

Historians believe that the tales we tell of Paul Revere are replete with exaggerations and inaccuracies, as is Longfellow’s poetic account of the events. At the same time, though, it is certainly not veracity that matters most. Far more important is that we hear the story, and that we visualize the man on his horse riding excitedly through the streets of colonial Massachusetts.

Since children learn of Paul Revere through story and poetry, vivid imagery remains in their minds, far longer than the lists of battles and generals they memorized in history class.