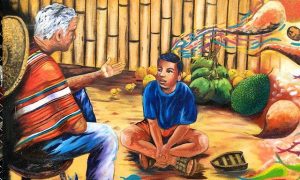 The previous post provided some detail about a phenomenon that began to fascinate me more and more, at the time when real-world cases and anecdotes were taking center stage in my teaching. As I wrote previously, I had observed rather quickly that students were retaining information better and longer when we presented it in these narrative forms.

Once I had clear evidence of this “memory effect”, my attention and curiosity turned to finding answers to two further questions. First, in the academic literature I was perusing, what would I find in terms of scientific, theoretical, or even anecdotal explanations for narrative’s powerful memory effect?

Secondly, if students’ recalling of course material had improved significantly on their end-of-term exams, I wondered if that might be a relatively short-term phenomenon, or a more lasting one. Indeed, what interested me most was finding out if the concepts they had retained at the end of our course would serve them later in their careers.

As I continued down the path of questioning why we remember stories so easily, I was increasingly conscious of some fascinating aspects of my research that—once again—seemed related to the work I was doing in my business school classes. My doctoral investigations and fieldwork were honing in more specifically on what would become a central research query of my dissertation: How do leaders use personal storytelling to inspire others, and could I effectively coach my clients to use this stratagem in their organizations?

While one might assume that my intellectual pursuits around such a theme would have little relevance to my teaching of graduate courses in management, I was nonetheless discovering significant overlap between the two undertakings.

In fact, as I continued to scrutinize the literature on why storytelling is such an effective form of communication for leaders, much of it seemed quite useful for my teaching as well. For example, the most effective communicators often utilize narrative because stories simplify complex concepts, and thus make them more comprehensible for their listeners. In the classroom, I was discovering that well-chosen cases and anecdotes could do something similar for me as I led my classes in new directions.

With respect to my second question, concerning how long recall was likely to last, I was not at all sure about this when I began using case method methodology. What I hoped was that the students would be able to remember at least some of the stories and situations we had studied, and refer to them when they encountered similar circumstances in their work groups and organizations.

While the first few semesters of case-based learning were truly encouraging, they could not provide enough evidence or perspective to suggest a definitive answer to this question. All I knew back then was that the early results were truly encouraging. Students I would encounter 18 months after they completed my courses often continued to talk to me about the stories we had seen together.

While all this was impressive and gratifying, it is what I would see in subsequent years that would unquestionably validate my decision to teach this way.

What began to happen, and would subsequently occur on a regular basis, was something beyond any of my expectations. Month after month, year after year, I would receive calls and messages from former students, many of them telling me that, not only did they remember lessons from our cases, but they were indeed finding ways to use them.

Typically, these interactions would take a similar course. For example. an alumnus from one of my classes might call and say something like this: “Let me tell you about the situation my company is in today. It reminds me of the IKEA case we saw in our leadership course, and I was wondering how you see it. I’m thinking of recommending a similar policy to the one they followed.”

What I find truly remarkable is that such conversations are still taking place today, on a regular basis, and at times even with individuals who left the school as long as 25 years ago. For me, this is truest proof of the validity of the case method, and of narrative-based learning in general.