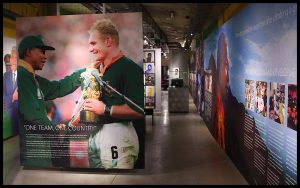 In the previous post, we noted that there is certainly more to tell about Nelson Mandela’s efforts to preserve the Springboks as South Africa’s rugby mascot.

For example, one compelling aspect of the story is the president’s personal commitment to promoting the sport as a unifying force, and his surprising success as a spokesperson for defending an animal that once stood for divisiveness. A second extraordinary element is simply how effective Mandela was at executing his plan. And, a third noteworthy consequence of saving the Springboks was the profound impact it had on South Africa’s development, at a crucial moment in its history.

All of these points may provide fodder for future blog entries, perhaps even as soon as the next one. Today though, as promised in the last post, we focus on two other parts of the president’s plan to unify all South Africans around the first major worldwide sporting event on their territory—the 1995 Rugby World Cup.

By way of review, part one of President Mandela’s plan centered around the traditional symbol of the rugby side. As such, his first goal was to convince his black countrymen—in particular those who argued vehemently for banning the Springboks—that this emblem could indeed have its place in the country’s future. His ultimate aim was to give the Boks a completely new and different meaning for future generations of South Africans.

Though a critical initial step, saving the mascot was merely the beginning of Mr Mandela’s “rugby for unity” project. A second facet was showing his own support for the team, even befriending the players in ways that were visible to the population.

There was just one small problem with this part of the president’s plan. Before he could develop any type of relationships with the team or the individuals, Mandela had to learn something about the game itself. Since he knew very little about the sport, he went about studying rugby’s rules and culture, in much the same way that he had studied the ways of the Afrikaners during his stay in prison.

As he began to understand the game a bit more, he reached out to the captain of the Springboks, Francois Pienaar. As they took afternoon tea in the president’s office, Mandela spoke of his enthusiasm for South Africa’s hosting of the World Cup, and of the role he thought the Boks could play in uniting the nation. The two men hit if off from the start. Over time, they even developed a friendship that would last until Mr Mandela’s death in 2013.

Inviting Francois Pienaar to tea was just one step toward a larger objective. The president wanted to meet occasionally with the squad, to speak to them on their terms and in the language of their game. He took an interest in the players as people, asking them about their preparation, their injuries, and their concerns about the upcoming tournament.

Not only was the recently elected president supporting the once-hated Springboks, he was doing it visibly. Several of Mr Mandela’s visits with the rugby side, and his conversations with the captain, were well reported in the news media.

Making a point of befriending the Boks in ways that were perceptible to everyone was a crucial element of Mandela’s behavior prior to the big event. If this world championship was to become the turning point he envisioned for South Africans, he wanted to show the way himself. In Mandela’s mind, part of his role was leading on the path to breaking down the wall between the team and the black population.

It would be difficult to overemphasize this last point. Indeed, a necessary part of this unique story was that Nelson Mandela embodied the narrative he was telling about the Springboks and about the nation’s future.

As such, a key element of Mandela’s remarkable leadership was his role as a teacher, the one who could show his people how to see their world in new ways and with new mindsets.

Nelson Mandela’s effectiveness as a teacher will provide our theme for next time.