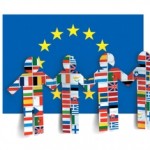 The following “guest” post is from Eduardo, our MBA student, friend and supporter.  Here, he questions whether Europe can succeed without a common frame of reference, without stories of shared identity.  The question is an interesting one.  After all, as we have stated on numerous occasions on this blog, a community is a collection of individuals who share similar stories of identity, and who find meaning in those stories.  By this standard, how many generations will it take before we can consider the European initiative a true “success”?

Much has been spoken of the current crisis hitting the Eurozone. For the purposes of this blog, the most startling feature has perhaps been the lack of leadership displayed by European politicians.  These “leaders” have been given innumerable chances over the last year eighteen months to display boldness and get ahead of the curve with a policy response to stem the endlessly escalating crises. Instead, what we have witnessed is a reactive attitude, with absurd summits that highlight a worrying lack of political resolve. Throughout these developments, the reactions of my fellow MBA students have oscillated between incredulity, anger, frustration, and fear.

Why this lack of leadership? Is it incompetence? In fact, this is not the case. The core of the problem is a lack of shared identity and stories. Stories define our communities, providing a sense of collective identity, and a sense of belonging. Do European leaders share an identity that propels them to reach difficult decisions and fix the structural problems in the union? The answer is a clear “no”; they seem more attached to traditional national identities and stories.

On July 17th German chancellor Angela Merkel was asked on German public television why she has never invoked or “tried to sell” the EU as a “project that has brought 50 years of peace”. She avoided answering the question and explained: “I have said that if the euro fails, Europe will fail… But we must find practicable solutions.” This subtle answer encapsulates her lack of willingness to lead with stories that inspire and transform those around her.
“Tell me what you believe in, and I’ll tell you who you are!”

Angela Merkel (and many other Germans) seem more attached to the stories of identity of an austere and hardworking Germany than to those of a political and economic union with what they regard as more profligate partners. By tightening their belts and working hard, the German people have made it through tremendously challenging moments such as the post-war period or unification. Arthur Freitas, a fellow MBA student from Germany, commented to me how he was taught, from an early age, that a box of cereal is never finished until all the powder at the bottom of the box has been eaten.

Ms Merkel is now being criticized by some, including former chancellor Helmut Kohl, for not being pro-European enough. There have been many instances when Ms Merkel has been given the chance (as she was on the 17th) to say something passionate about European identity and the European story. She has never been able or willing to take this opportunity. Whether this is a political bluff or a crude reality regarding European identity will have profound consequences for the future of the Eurozone.