A flawed argument from Hillary Clinton’s book, What Happened 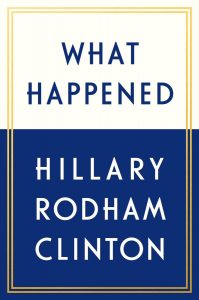 In the last post, I referenced Hillary Clinton’s declaration that her background and upbringing were not very interesting, particularly when compared with those of the last two Democratic presidents, Bill Clinton or Barack Obama. Based on all my research and experience, I must say that this is a rather specious argument, a feeble attempt to explain “what happened” when she ran for president.

The critical issue, from my perspective, is not so much whether her story was compelling or not, or how it compared with those of her husband or former president Obama. In fact, Mrs Clinton’s assertion holds particular interest for me, as it is in direct conflict with one of my central convictions: Everyone has a usable past; some people simply learn to use theirs better than others.

In most cases, people who emerge as leaders in organizations or in the world of politics do not have extraordinary past experiences. Rather, what is extraordinary about them is the way they learn to use their life stories.

For approximately the past twenty-five years, I have helped hundreds of individuals learn to express who they are and what they stand for by telling their personal stories of identity. These people come from a wide variety of backgrounds, and they work at all levels of all types of organizations. Almost none of them have anything “special” in their upbringing or life narrative. In virtually every case, though, we are able to find and tell relevant stories from their lives, anecdotes that help them express their true nature and core beliefs to those around them.

We accomplish these things together by teaching them to reflect on their past, process their life experience, and find the authentic stories that express who they are, what they stand for, where their beliefs come from, and why they do things the way they do.

The case of Hillary Clinton: In my post-election effort to understand what did indeed happen, one of the most enlightening pieces I encountered had actually appeared in the The New Yorker magazine just days before the election. Entitled “Hillary Clinton and the Populist Revolt”, it told of the concern among Mrs Clinton’s people, prior to the November voting, that she had underestimated the despair of large segments of the working class. In fact, one unnamed adviser told the article’s author that “Hillary’s years in the State Department had insulated her and her staff from the mood of ordinary Americans.”

In addition, a number of hacked emails from the account of campaign manager John Podesta—made public by WikiLeaks—had clearly shown a growing unease among the Clinton team over paid speeches she had made to Wall Street executives. The campaign was afraid that, if some of the transcripts were made public, she would be portrayed as inauthentic, two-faced, and overly friendly with the corporate elite. Much of Hillary’s public speaking and fundraising were done at gala events for wealthy individuals and groups on the east and west coasts, America’s most affluent regions.

Among the principal reasons that the democratic candidate was seen as so out of touch with the mainstream was simply that she and her husband, despite their “common people” rhetoric, were now living among the ultra-rich. According to the New Yorker article, private citizens Bill and Hillary earned roughly one hundred thirty-nine million dollars between 2007 and 2015.

These concerns from some members of Mrs Clinton’s team could also be seen in public opinion. For months before the election, polls were indicating that she was perceived by many voters as stiff, aloof, impersonal, distant, out of touch, a technocrat and a Washington policy wonk. Voters said they did not know who she is and what she stands for. Furthermore, an analysis of the numbers shows that the people she was most out of touch with were the American working class.

In 2014, Mrs Clinton made a telling statement to an audience from the investment firms Goldman Sachs and BlackRock. Referring to her “solid middle-class upbringing”, she admitted to those in attendance, “Now, obviously, I’m kind of far removed, because of the life I’ve lived and the economic…fortunes that my husband and I now enjoy, but I haven’t forgotten it.”

Given the concerns cited above, regarding her failure to reach out to Middle America, it remains baffling to me that Mrs Clinton and her team could not find ways to use stories from this “solid middle-class upbringing” in her public speeches and media interviews.

Next time, I will make my attempt to outline the type of personal story of identity I would have suggested Hillary Clinton use in her campaign for the presidency.