Hillary Clinton’s failure was as a storyteller

Hillary Clinton’s failure was as a storyteller

Hillary Clinton’s failure was as a storyteller
Posted on December 16, 2016 in John's reflections, Storytelling 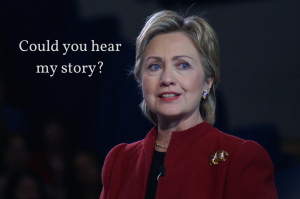 As we saw in our previous post, Barack Obama used his personal stories—uplifting and aspirational tales garnered from his own life experience—to forge deep connections with his constituents. His skillful use of narrative has certainly contributed substantially to his remarkable electoral successes.

In addition, I commented that I saw Hillary Clinton’s inability to clearly express who she is and what she stands for—to tell her personal stories of identity—as one of the principal factors in her recent loss to Donald Trump. In the coming weeks, I will discuss my thesis about how effective communicators lead by autobiography, with illustrations from this November’s election, along with other historical examples.

I begin today, though, with some quick personal thoughts about what I have seen in the post-election coverage, which I have contemplated with a level of interest that is not at all customary for me. In fact, it is the first time in my life that I have read and watched so much coverage of this type of event. For better or worse, I continue to believe that we may be living a watershed moment in political history, particularly in the way campaigns are run, and also in the ways they are covered by traditional news outlets.

After Donald Trump’s presidential election victory stunned much of the world, I must admit to following the subsequent media analysis with a bit of cynicism. It amused me that so many commentators, the same ones who told us in the weeks leading up to the voting that Trump simply had no possible path to success, were now explaining to the world precisely what that path was, in ways that now made it appear not only eminently achievable, but also logical.

It also astonished me that so many of the pundits were now calling Hillary Clinton—whom they had only days before declared the most qualified individual ever to seek the highest office in the United States—a “flawed candidate”. To me, this explanation is far too simple, and I was not sure what flaws they were referring to. In fact, and especially if one considers the popular vote, Ms Clinton very nearly won the presidency. Had she done so, the same “experts” would have been calling Mr Trump the “flawed” one.

In any case, the views of the pundits—which I found to be extremely banal, simplistic, and perhaps even “flawed”—are not my core topic for today. Once again, though, I find myself drifting into politics to make my points, and I should reiterate that I am merely a casual observer, far from a skilled professional commentator. At the same time, I continue to believe that Hillary Clinton’s problem was not so much that she was flawed, but rather that she failed at telling her own story.

Of course, my own professional experience is far more with individuals and groups in an organizational context, rather than with well-known public figures. Nonetheless, it has at times been fascinating—for me, and also for my students and audiences—to apply my storytelling perspective to electoral campaigns. As I told the managers I spoke to at Disney in Argentina two weeks before this past presidential election, I discovered long ago that personal stories of identity are among the most powerful devices anyone can use in persuading any constituency.

As such, I do tend to think that, particularly in close elections, the personal stories that resonate best with voters can indeed be a determining factor in the outcome. The examples we saw last week from Barack Obama’s discourse certainly lend credence to this premise.

When I reflect on the core concepts I have emphasized in my work with organizations—and also in much of the research, teaching, and coaching I have done for the past two decades—there are two notions that seem to apply directly to political campaigns. First, competency and rational argument alone simply do not inspire; stories do. And second, we generally do not win people over by standing against things, or by dwelling on the shortcomings of our rivals. In order to truly influence others, we must emphasize foremost our own identity by speaking from the heart about who we are and what we stand for.

As I told audiences in Argentina in the weeks preceding the US presidential election, I perceived a similar phenomenon in the strategies of John Kerry in 2004 and Hillary Clinton this year. Each of them was so focused on standing against a flawed opponent that they failed in telling their own stories, and thus failed to sway undecided voters.

I will give some more detail from both of these campaigns in the next entry.