How Nelson Mandela reshaped himself in prison

How Nelson Mandela reshaped himself in prison

How Nelson Mandela reshaped himself in prison
Posted on November 26, 2021 in Identity Stories, Leadership 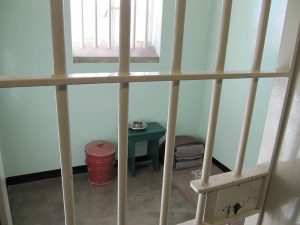 In the previous post, we looked at the extraordinary change of attitude that transpired during Nelson Mandela’s lengthy incarceration. Bit by bit, Mr Mandela evolved from a defiant prisoner who scorned his “oppressors” to one who befriended the jailers and embraced their Afrikaans language and culture.

We also stated last time that choosing to treat his wardens with respect, and  learning their dialect, was but a small portion of Nelson Mandela’s profound transformation during his years in prison.

In fact, what happened at Robben Island and the other correctional facilities that housed him was a thorough reshaping of Mr Mandela’s entire temperament, a metamorphosis so unlikely that it is difficult for us to comprehend. When sentenced to life imprisonment in 1964, the future president entered as a fiery, hot-tempered, militant freedom fighter, considered a dangerous terrorist by the white ruling party. The man who walked free nearly 26 years later was entirely different—measured and moderate, possessing the thoughtful calm and the masterful negotiating skills of a seasoned statesman.

This evolution was a particularly surprising turn of events when one considers this man’s militant past, and the role violent resistance had played in his earlier point of view and approach. For most of his life, Mandela had indeed promoted brute force as the only way to confront white dominance in his country.

In 1962, for example, he secretly and illegally left the country for six months of intensive military training, and to seek foreign support for “Spear of the Nation”, the armed wing of his African National Congress Party. Years later, in February 1985, when South African President PW Botha offered to release him and other political prisoners if they would renounce violence, Mandela refused.

How does this type of slow and steady metamorphosis happen? In sum, the tempestuous radical of the 1960s slowly learned to be reflective, and those years of reflection changed his life.

By his own account, Nelson Mandela considers his time in prison as the turning point of his life, the event that allowed him to grow into the leader he was to become. In his jail cell, he took time to think in ways he had not before, about his past life, about his desire to become a better person, and about the need to eschew anger and vengefulness. He was able to achieve, in his words, “the most difficult task in life…changing yourself.”

Mandela described this personal change to Oprah Winfrey in 2001: “Before I went to jail, I was active in politics as a member of South Africa’s leading organization—and I was generally busy from 7 A.M. until midnight. I never had time to sit and think. As I worked, physical and mental fatigue set in and I was unable to operate to the maximum of my intellectual ability. But in a single cell in prison, I had time to think. I had a clear view of my past and present, and I found that my past left much to be desired, both in regard to my relations with other humans and in developing personal worth.”

Thus, if his long incarceration was the defining incident of the future president’s life journey, the important part of the story was not the event of going to prison, which was a common occurrence for militant activists in South Africa at that time. Far more interesting was Mandela’s reflection and processing of the experience.

The tale of Nelson Mandela’s confinement is an exceedingly unusual one. Most examples of terrorists and political prisoners sentenced to lengthy prison terms end up feeling victimized and vengeful. Others become dejected and defeated. Relatively few emerge as more thoughtful individuals who exert a positive influence in their worlds.

As such, Mandela was not at all typical. Rather than let the experience of his tiny jail cells discourage or embitter him, he was able to turn it positive. The work he did on himself during those prison years transformed Nelson Mandela into the man who would emerge as South Africa’s first post-apartheid president, and a worldwide symbol for justice and fairness.