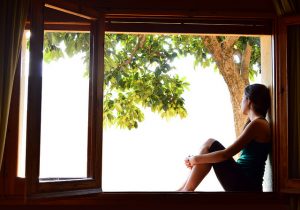 In the realm of philosophy, renowned Danish thinker Soren Kierkegaard (1813-1855) is credited with the following declaration: “Life can only be understood backwards; but it must be lived forwards.”

In the early 1990s, I “discovered” a similar notion on my own, as an outgrowth of my work and research in the field of identity stories. At the time, I was not aware of Kieregaard’s use of the concept, nor do I remember if I had heard the words previously. In any case, it is a concept that became a cornerstone of all my work as a teacher, consultant, and public speaker.

Though the underlying ideas are much alike, my way of expressing it differs from that of Kierkegaard. For my purposes, it works best this way: “We live life moving forward, but we can only understand it looking backward.”

In precisely what way is this perspective important to my work? Quite simply, if leadership—and indeed influence in general—begins with self-knowledge, that self-knowledge stems from one’s capacity to reflect on one’s past experience. In other words, individuals who truly know themselves are those who have significant practice at looking backward to understand the lessons of their lives.

In my TED talk in Delft on March 22, I spoke briefly about a few of the key conclusions of the early reading and research I did for my doctoral dissertation. When I began looking for a specific research question to direct my study, I first set out to find patterns in what makes leaders effective. Rather than limit myself to a single field, I wanted to look at individuals who had influenced their worlds in meaningful ways, irrespective of the type of organization or the context.

As one might suspect, there is an enormous amount of literature on the theme of what makes a leader. Much of it focuses on three elements: personality types, leadership styles, and behaviors.

While I found wading through the literature fascinating, it was also somewhat frustrating. At times, it seemed as though each study I came across was contradicted by another one. For example, if one credible scholar found that authoritarian extroverts tended to make the most inspirational leaders, another equally competent researcher would maintain that empathic introverts were best.

When I became frustrated with it all, I started playing a game with myself and my approach. I would look for pairs of truly inspirational leaders who seem to have nothing in common. In other words, they appear to be total opposites in terms of personality and behavior. Then, I would continue reading about them, looking for some “hidden” attribute they might share.

For example, I would study the abrasive narcissist Steve Jobs alongside the soft-spoken, self-controlled unifier Nelson Mandela. Over time, looking at a large number of these unlikely pairs, I came up with a model that worked for me, and for the purposes of my research.

What I found was that a great number of influential individuals shared three common elements, which had nothing to do with personality, or style, or behavior.

First, they have deep self-knowledge. By this I mean very clear ideas about who they are, what they stand for, and why they do things the way they do.

Second, they are not afraid to speak from the heart about the things that matter to them.

And third, they use personal stories from their lives, what I came to call their “identity stories”, to inspire others, and to influence their worlds.

If we contemplate the three items together, we can readily see how they are interrelated. People can only glean self-knowledge, and learn to tell the stories of their life lessons, if they become good at looking backward to analyze their past. Once they understand who they are and what they stand for, they become increasingly eager to speak from the heart.

In the weeks to come, we will take a closer look at how people of influence reflect on their life experience and learn to tell their identity stories. In addition, I will emphasize one of my own deep convictions—that these are things we can all learn to do.