Reflection and the young, busy manager 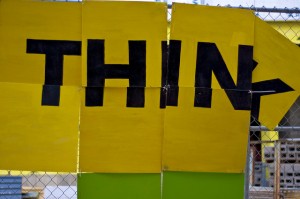 Recently, I spoke to a focused and lively audience at Banco Galicia in Buenos Aires. For the past two years, I have been writing articles for their remarkably well done digital platform, buenosnegocios.com. As part of the program, they periodically invite writers to make presentations at breakfast events. Attendees at such talks tend to be middle managers from the bank’s client base, along with a small number of internal people.

The bank, which was named by Fast Company as one of the most innovative companies in Latin American in 2015, is always a pleasure to visit. Events are impeccably organized, attendees are highly engaged, and even casual conversations with the team from buenosnegocios.com are often energizing.

The organizers asked me to discuss some of my views on how one becomes a leader: What is myth and what is reality in our modern perception of what makes any group’s chief effective? In describing some of the behaviors or characteristics that people who influence organizations seem to share, I put forth the concept that many of the most effective ones I have worked with or observed were quite reflective.

The most effective managers of people spend a significant portion of their time pondering such questions as: who they are, what they stand for, why they do things the way they do, how they see the future, and what influence they would like to have in their groups, and in their worlds.

As I hold the firm belief that leadership begins with self-knowledge, I have long advocated that my clients work to put structured moments of reflection into their schedules. The most successful leaders engage in a continuous processing and reprocessing of their life experience; they are constantly revising and updating their views of themselves and their worlds. It is only through this type of reflection that an individual comes to understand what she stands for, and how to express it to the world.

General Electric CEO Jeffrey Immelt says that he regularly takes time to consider how he sees the world and his role in it. In his view, highly effective managers are characterized by an inherent curiosity about everything around them, and they spend a significant portion of their time trying to learn and understand things. Despite one of the corporate world’s most demanding schedules, Immelt strives to spend much of his time—up to 20% of it—reading and reflecting.

After my talk, about 30 of the participants came up on stage, formed a semi-circle around me, and lobbed questions in my direction. Judging from their queries, a good number of them must have been busy middle managers.

Predictably, the subject of reflection was revisited, and their comments were not new to me. In fact, I have often heard similar concerns wherever I have gone for over a decade. Today, managers’ lives are so filled with tasks to do every day— along with a continuous flow of email, text and other forms of messaging—that there is almost no time to think deeply about anything.

Managers who tell me there is no time to reflect bring to my mind the words of Nelson Mandela when he explained why going to prison did him so much good: The former president described his life before incarceration this way: “Before I went to jail, I was active in politics as a member of South Africa’s leading organization—and I was generally busy from 7 A.M. until midnight. I never had time to sit and think.”

While I do not advocate going to jail as a strategy for gaining some reflective time, Mandela’s observation is interesting for all of us. One of my key learnings of the past two decades is that managers at all levels who succeed at building reflection into their lives are simply more effective than those who do not.

In closing last week’s post, I made reference to research about the impact of reflection on job performance. In fact, I was performing a search on the term “reflection”, and this title caught my attention: “Learning by Thinking: Overcoming the Bias for Action through Reflection”. It is an academic paper published recently by Harvard, and it contains a number of interesting premises, along with a well-structured field study.

I will discuss the findings of this paper in more detail some time in the coming weeks, but suffice it to say today that for me this was an unusual piece of research. Many studies have focused on the role of experience (doing) in fostering progress. This one attempts to gauge the direct impact of reflection (thinking) on a learning process. And, the authors have convincing arguments to show that we are probably underestimating the key role of thinking in the acquisition of expertise, particularly in a business context.