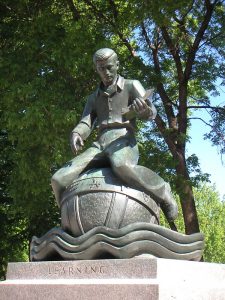 In the previous post, we saw that story’s sequential flow is a significant element of its power as a mnemonic device. To me, the Memory Palace system we discussed last time is an interesting technique, especially from a storytelling perspective. In essence, its success as a memory aid is derived from imposing a rudimentary narrative structure on a random list of items or facts.

When I began researching the use of storytelling in organizations for my doctoral thesis, it piqued my curiosity about narrative in general, and specifically as a helpful tool in memory and learning. Of course, part of the reason for my interest was my own experimentation with story-based methods in my classes. As we have seen in prior posts, using business cases was producing remarkable results in the setting of a graduate school of business.

At the same time, I wanted to see how extensively this type of learning was used—and how well it worked—in other contexts. One of the environments that interested me was that of early education, since much of the literature I was looking at espoused the concept that it is through narrative constructs that children learn to think.

As such, over a two-year period, I was able to do a series of informal interviews with a dozen grade school teachers. The individuals I spoke with came from four different countries, a wide variety of cultures, and a diversity of educational philosophies. While each of these encounters was informative, they were not conducted with the same precision as my academic research. Rather, I sought out the individuals without a formal plan, and with the sole purpose of engaging in informal dialogue about a subject of personal interest.

Nonetheless, what struck me about these conversations was the similarity of the themes that surfaced repeatedly, and their connections to the findings of my dissertation. For instance, not only did each one of the instructors say that they use storytelling often, many commented that anecdotes almost always have the effect of stimulating increased concentration levels among their pupils.

One particularly enthusiastic sixth grade teacher in the United States stated that storytelling tends to make a lesson far more powerful. Almost without exception, when she starts a new topic with, “Let me tell you a story,” the class settles down and listens instantly. In addition, she finds that she can hold their attention for the whole period, long after the story ends.

At about the same time, a French woman I spoke with noted that even class members who were not generally attentive tended to remember stories more than anything else from her lessons. At the end of the year, her group of eight and nine year-olds were still referring to anecdotes they had heard many months before.

Speaking with the primary school educators I was able to meet reaffirmed much of what I was seeing in my doctoral research. In particular, I saw that the process of hearing and telling stories is one of the best ways to make lessons stick. Also, thinking in narrative form and using storytelling to give meaning to lessons are phenomena that seem to pervade many aspects of learning, regardless of age or setting.