Story is simply the way we think 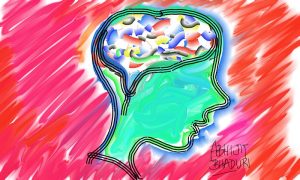 At the conclusion of the previous post, I was looking back and reflecting on the early months of my doctoral research. In particular, I recalled my surprise at the large number of writers and researchers I encountered whose work pointed me toward a straightforward conclusion: human beings think in story form.

In fact, when I began studying the theoretical aspects of  personal storytelling, I thought I might find support for the concept that narrative is a vital component of thinking in general. What I found was far more evidence than I had ever imagined for the notion that story constitutes the underlying structure that our minds use to organize and retain information.

In addition, I came across a plethora of authors and researchers who postulate that narrative is far more than a vital element of human thought. It is simply the way we think.

It also struck me that those expressing such views came from a wide variety of fields. There were literary scholars, of course, but also psychologists, neurologists, linguists, and artificial intelligence experts. As I delved deeper into the literature, I found an  increasing number of them who asserted that narrative is the natural language of the mind.

For instance, one eminent psychologist who did in-depth research about the relationship between story and thinking was Jerome Bruner, whom many professionals see as the most important contributor to educational thinking of his generation. In a landmark 1991 article entitled “The narrative construction of reality”, Bruner writes that children remember and use concepts by turning them into stories, and that this is a pattern of thought that continues into adult life.

Bruner went on to champion the concept that narrative is absolutely central to the process of learning to think. As he describes, story is “the only way children have of organizing the world, of organizing experience… they turn things into stories, and when they try to make sense of their life they use the storied version of their experience as the basis for further reflection. If they don’t catch something in a narrative structure, it doesn’t get remembered very well, and it doesn’t seem to be accessible for further mulling over.”

Another voice that espouses narrative as the way we all think and make sense of our world is that of Canadian journalist Robert Fulford. In The Triumph of Narrative: Storytelling in the Age of Mass Culture, he emphasizes the point that reliance on stories to make sense of things is not merely a phenomenon of childhood. In Fulford’s view, this use of story is our natural “innate tendency”, and this “need to shape the past as a coherent narrative will not leave us.”

Fulford sees storytelling as the core of civilized life, the juncture where facts and feelings meet, the bundle in which we wrap truth, hope, and dread. Narrative, he says, is how we explain, how we teach, how we entertain ourselves–and how we often do all three at once.

In Fulford’s view, adults as well as children actually need stories and storytelling to make sense of their world. As I mentioned last time, the renowned psychiatrist Bruno Bettelheim concurs, stating that we come to understand the world by choosing among stories, in an effort to find the ones that make the most sense.