Searching for Joe Biden’s story
Posted on June 21, 2020 in Leading by autobiography 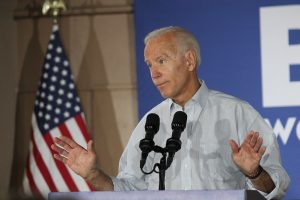 It seems that every four years, history repeats itself, and something causes me to write about US politics. Of course, the recurring nature of this phenomenon has something to do with a forthcoming presidential election. At the same time, my perspective on such events is not at all political.

So, just as I did when I wrote about Hillary Clinton in 2016, I begin this post with my usual disclaimer. As I recall, I was on a speaking tour in Latin America in the weeks leading up to the face-off between Mrs Clinton and Donald Trump. Speaking to an audience at Disney who had asked my opinion, I ventured reluctantly into the arena of political commentary. At the same time though, I was careful to state that it was neither my role nor my desire to claim any expertise in such matters, or to take sides in such battles.

On the other hand,  observing elections is often fascinating from my personal perspective, and often exceedingly relevant to my work. Of course, many readers will recognize that the reason for my attention to these events has to do with the candidates’ use of narrative. As in other arenas, I like to analyze individuals’ self-expression, to measure how well they are using their personal stories of identity to inspire others.

In 2004, I remember thinking that the Democrats and their nominee were falling into a familiar trap. As I saw it, John Kerry’s campaign had chosen to highlight a concept they thought would hit home with people: the mistakes and failures of the incumbent Bush administration, particularly with respect to the ongoing war in Iraq.

President George Bush’s popularity, which had soared immediately after the terrorist attacks of September 11, 2001, had declined steadily since then. By 2004, there was a growing anti-war sentiment among the American populace. Military involvement in Iraq was dragging on, and the Bush administration had failed to provide concrete evidence of Saddam Hussein’s “weapons of mass destruction”, which had been the underlying justification for the declaration of war in the first place.

Encouraged by the president’s declining poll numbers, Kerry’s advisors advocated a strategy that played to the public’s discontent with the president’s perceived shortcomings and misjudgments.

The problem for Kerry—and I did point this out in my seminars in the months leading up to the election—was that he was defining himself largely in terms of the opponent. He stood against George Bush, which was perhaps a viable tactic, but he failed to inspire the voters with what he stood for.

This is a critically important point that I simply cannot emphasize enough: We do not inspire others by standing against something or someone. Rather, we inspire others by showing who we are and by expressing what we stand for at our core. We move people to action with our personal stories that demonstrate our values and character, and with tales of a favorable future we can create together.

John Kerry spent a lot of time—far too much, in my opinion—talking about everything that George Bush was not, and about all the mistakes that his opponent had made as president. In the end, we did not feel clearly enough who Kerry was, or what he stood for.

As such, I was truly surprised in 2016 to see Hillary Clinton and her people following a path similar to that of Kerry in 2004. In the months prior to the final vote, we saw her again and again trying to frame the debate in terms of her opponent’s character flaws. Concentrating so much attention on the deficiencies of Donald Trump, she failed to give a clear definition of who she is and what she stands for.

Instead of promoting her own vision, Clinton focused on the horrific prospect of a Trump presidency. This was true both in her public discourse and her spending on advertising. According to the Financial Times, roughly three-quarters of her television ads warned of her opponent’s personal deficiencies, particularly his attacks on ethnic minorities, on the disabled, and on women.

Of course, I never claim to be an expert in politics or a predictor of the future. On the other hand, I am observing the unfolding discourse of the Biden campaign, and it is causing me to believe that he also may run the danger of focusing too heavily on Mr Trump’s shortcomings, and neglecting to define his own vision with clarity.

Next time, I will explain a bit more why I see things this way.