The stress of talking politics in our polarized world

The stress of talking politics in our polarized world

The stress of talking politics in our polarized world
Posted on October 6, 2017 in Storytelling and Politics 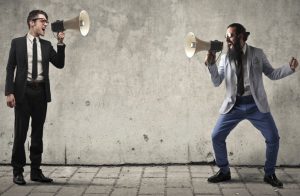 These days, I have been traveling more than usual, much of it to New York for work with clients who are requesting large blocks of my time. Working with them is fascinating and fun, since it involves one of my favorite undertakings. In fact, I am now truly feeling in my element, helping organizations express who they are and what they stand for, and doing it in ways that help them influence their worlds.

As I have observed here previously, there are quite some lessons worth discussing from these ongoing consulting initiatives, in particular about learning to express an organization’s values and true nature, and how one can do this effectively, even in the context of a formal slide presentation. My subject today, though, concerns something I have gleaned from my increased presence on US soil.

One of the advantages of being in the States so often is that I have been surrounded by American news, in the papers, in discussion with clients and colleagues, even in the relatively small amount of television I watch. This proximity has allowed me to understand far more clearly some of the reasons for the extreme polarization of American society, and the enormous role social media—Facebook in particular—are playing in pushing this phenomenon forward. In fact, the more I see and read, the more I am convinced that this polarization is increasing not only in the US but throughout the world, and that it is truly aided and abetted by social media sites.

Among the thought-provoking items I happened to see last week was this season’s premiere episode of the popular American TV magazine, 60 Minutes. This year’s opening segment had been highly anticipated; Oprah Winfrey, one of the most famous media personalities of our time, was joining an already illustrious team of journalists and presenters.

Unbeknownst to me, Oprah’s first undertaking honed in directly on the notion of polarization in American politics. She and her team organized a focus group, with the goal of gauging public sentiment eight months into the presidency of Donald Trump. The underlying question: Was the divide that was widely reported after the last election still as deep and bitter as before?

They chose to set up this roundtable discussion in Michigan, a state that played a pivotal role in the election. Gathered together were a diverse group of 14 voters—everything from fervent Trump supporters to Trump haters. Oprah asked them not to hold back but rather to truly lay everything out on the table. Among those present were a farmer, a drug counselor, a speech therapist, a former General Motors factory worker, and a sales manager. They all had a lot to say about the state of their country in the early months of the Trump administration.

Much of the resulting dialogue was as one might expect. The participants began by talking about how divided the country was, and about how members of their families had stopped speaking to each other during the electoral period. There was delight from those who had supported Mr Trump. They continued to rejoice in his disruptive policies, and his anti-establishment rhetoric, though some of them admitted to being shocked by his offensive language and erratic use of Twitter.

Equally predictable were the anger and disgust from the anti-Trump camp. At the end, though, I must say that there was something surprising, an outcome that I plan to discuss in a future post. Today, though, I would like to focus on my initial impression when I began watching the discussion.

In fact, it all brought to mind some insightful research I read about recently, from the Pew Research Center. According to their study, Americans today are in an unprecedented time of strain and pressure when it comes to discussing politics. More precisely, nearly 60 percent of those questioned characterized the act of talking with people who have a different opinion from their own as “a stressful and frustrating experience”. Only 35 percent chose the adjectives “interesting and informative” to describe such interaction.

Of course, we will delve further into the implications of all this—and some of the underlying reasons for it—in the coming weeks.