The making of a speaker 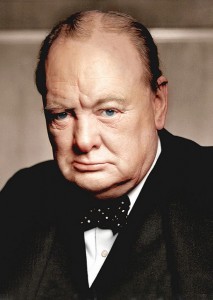 In the last post, I wrote that true masters of rhetoric and public speaking—every one that I have either observed or researched—hone their craft through many hours of mindful practice. It is this mastery of their craft that allows them to deviate from their prepared remarks, in ways that may appear natural and spontaneous when they address an audience.

First and foremost, we should realize that the people who become great communicators have worked at it, and indeed worked at it with resolve. One of my favorite examples of this phenomenon is Winston Churchill, who is widely considered to be one the greatest speakers of modern times, and also someone who often surprised audiences with his spontaneity. As we will discuss a bit later in this article, Sir Winston prepared compulsively, crafting each word and phrase, and then rehearsing his sentences over and over.

As such, it is often surprising to me that much of society persists in the belief that some individuals are “natural” speakers. In my travels, my leadership coaching and teaching, I have encountered again and again the myth that outstanding oratory achievement might have its roots in a mysterious gift, something of inexplicable origin. In fact, I often hear observations such as: “Isn’t she fortunate to be such a gifted communicator!”

It remains one of the most frequent queries I get when I speak in public, or in private conversations: Are outstanding leaders—or orators—born or made? For me, after some twenty years of coaching and observing people in organizations, of teaching seminars throughout the world, and of studying the characteristics of effective communication, it has become an easy question to answer. The “born” communicator is simply a societal myth.

Today, researchers and best-selling writers are telling us clearly that success in any field is far more about focus and determination than about innate talent. Outstanding achievement is the result of a process, not a gift.

Learning to speak effectively and with confidence is a process of acquiring expertise. And, those who acquire this skill follow a pattern similar to those who achieve prowess in any field. Whether one considers the achievements of Mozart in composing, of Tiger Woods in golf, of the Beatles in performing popular music on stage, or of Gary Kasparov in chess, the model that emerges is one that always includes deep passion and intense practice.

As such, becoming an orator is no different than becoming anything else. When one studies the lives of those we tend to think of as great “natural” communicators—Churchill, Mandela, Lincoln or Thatcher, for example—one finds that these individuals have practiced, and practiced a lot. Their voices, and their self-confidence, emerge and develop as they repeat their stories and their themes, over and over, with a constant desire to improve.

Among the most striking examples of a communicator who worked tirelessly at his craft was the great wartime leader Winston Churchill. It is often said that Churchill “mobilized the English language and sent it into battle”. What is less understood is that he spent countless hours planning and writing his verbal communication, weighing not only his words but also the pauses, rhythm and cadence that would produce his desired dramatic effect.

Daun Van Ee, co-author of Churchill and the Great Republic, and an authority on the Prime Minister’s oratory, explains that Churchill was in fact a master of a technique I call “writing as spoken”, a method I often use with my clients when they are training to make presentations. In many cases, I have found that the simple act of putting the words of a presentation on a piece of paper, and then imagining the flow of the speech, is indeed a valuable exercise that can help an individual develop self-confidence.

The master orator Churchill pushed this concept even further. Most of his speeches were constructed and put to paper in what he called “psalm form”, like the famous Biblical prayers, an almost poetic style. In this way he could get the right emphasis and he could pause at the places where he wanted to pause. He would work at finding exactly the kind of rhythm and the cadence that he wanted. Churchill visualized the tempo of each speech as he practiced it aloud; he understood that the inflection and energy of the delivery can be as important as the message itself.

Winston Churchill was famous for his quick wit, his humor, his capacity for spontaneity in the moment. But, before he became a virtuoso of repartee, he had spent countless hours mastering the classic craft of public speaking.