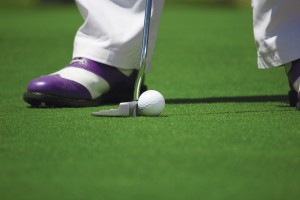 Writing the past few weeks about Martin Luther King and Winston Churchill caused me to think of something one of my first sports coaches at summer camp used to say: “Good things happen to those who prepare.”

In particular, I was reflecting on these two true masters of rhetoric and how diligently they practiced their craft. In addition, I thought deeply about the role of practice, happenstance, learning to be spontaneous, and how each of these diverse elements can contribute to a speaker’s development.

Indeed, great speakers such as Sir Winston and Dr King were able to use reactions from their audiences—and at times even happenstance—so well because they had practiced the art of discourse so thoroughly. One of the best observations I have ever heard about the role of happenstance, or more generally about luck in any field, comes from professional golfer Gary Player.

Whenever people would comment about a “lucky” shot the great South African champion had made, a hole-in-one for example, he would respond that the veritable origin of his “luck” was attention to the detail of his daily practice routine. Famously, on numerous occasions, he expressed his opinion on why some golfers seemed to be consistently luckier than others. At post-match press conferences, it was his custom to say: “You know, it seems the more we practice, the luckier we become.”

In an interview with Golf Digest in 2002, Player presented an entertaining account the first time he verbalized this principle: “I was practicing in a bunker down in Texas and this good old boy with a big hat stopped to watch. The first shot he saw me hit went in the hole. He said, “You got 50 bucks if you knock the next one in.” I holed the next one. Then he says, “You got $100 if you hole the next one.” In it went for three in a row. As he peeled off the bills he said, “Boy, I’ve never seen anyone so lucky in my life.” And I shot back, “Well, the harder I practice, the luckier I get.” That’s where the quote originated.

So, what do a golfer’s remarks have to do with our recent discussion of how outstanding orators develop their skills, and where might the lessons be for the rest of us? When I tell people that speakers sometimes evolve and grow the most in moments of spontaneity and happenstance, I am often asked how one can learn to integrate these characteristics into one’s style and behavior. And, what I tell them is quite simple: Prepare and practice diligently enough to master your “core”, and the rest will take care of itself.

In other words, if a masterful golfer such as Gary Player encourages “lucky” bounces by practicing rigorously, an orator learns to be comfortable with spontaneity and happenstance through the same type of practice. It is no accident that the best speakers seem to get the most benefit from audience interaction, or coincidence. As Mr Player comments, luck tends to favor those who work hardest and prepare the most.

My personal case is a relevant illustration of the role of practice and experience in learning to use ad libbing and spontaneity in front of audiences. In my early days as a university lecturer, teaching mostly by the case method, I wrote extensive notes and stayed very close to the lesson plan. As I gained experience, and through the daily practice of lecturing, I slowly changed into a professor able to comfortably stray from the “script”. Student comments, which had previously felt like disruptions, became welcome digressions from the structure, occasions to tell a story or set off in a previously unanticipated direction.

When I was afforded the opportunity to do public speaking in large venues—arenas such as the World Business Forum or Harvard Business Review seminars in Latin America—I experienced a similar phenomenon over again. In these new contexts, and in front of far vaster audiences, I was not completely comfortable with spontaneous reactions from the crowd, which often felt like disruptions to my well-designed “flow”. Then, when I had spoken numerous times on a subject, and rehearsed my material enough, I came to welcome provocative public interaction, which often caused me to think in new ways, or even to spontaneously discover ideas that could improve my future presentations.

By dint of practice, repetition and a true desire to improve, I had mastered my core concepts, themes and constructs well enough that I could now ad lib, react to my audience, or simply be spontaneous, without worrying about losing the thread of a speech.

So, far from claiming that I can compare myself to the great speakers of the world, my own experience demonstrates that all of us can learn the same way they did—through the right sort of practice, and our passion to improve.