Why Trump’s use of personal narrative served its purpose 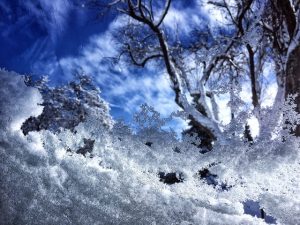 A few days ago, I went to a small ski area a few kilometers from my house. Thirty centimeters (about 12 inches) of heavy snow had fallen in the morning. The water content of the snow was extremely high, but it turned out to be very skiable. A nasty rain at lower altitudes meant that the crowds had stayed away, and so I had an absolute blast, skiing virtually alone for three hours.

Back home, when my family asked how the snow was, I had to say that it was not great by most standards. For me, though, it had more than achieved its purpose. People in town wanted to know if there was powder on the mountain. “Well”, I responded, “no, and yes.”  No, because it was not the light, dry snow that most of us think of when we use the word “powder”. But, yes, because the snow was deep, and it worked surprisingly very well as a skiing surface.

Now, for those who are wondering why I am writing about snow quality, let’s get back to one of the questions left over from last week’s post: Did Donald Trump have any type of personal narrative during his presidential campaign? And, if so, did he use it effectively? My answer to this question is similar to the one about the wet powder on the mountain: It was not wonderful snow, but it served its purpose.

In similar fashion, Donald Trump’s use of his personal narrative and life experience was, in my view at least, far from brilliant. Nonetheless, his life stories did help him win the election.

Recently, when I expressed the opinion that Hillary Clinton lost the election because she presented no clear personal narrative, a number of my colleagues and friends asked if I thought Trump had done better in this area. Most expected me to dismiss his efforts too, but in fact my views are a bit more complex than that.

Was Donald Trump able to use personal storytelling effectively? In one way my answer would be yes. He did talk about his business experience and its relevance to the work of the president. What he told the world was: I am a business man. I have spent my life negotiating deals. I can get the economy moving faster because I understand entrepreneurship and initiative. And, because I am a deal-maker, I will negotiate better agreements with our allies, our trading partners, and our adversaries.

Throughout the primaries and again in the general election, he used with great effect a story of being an outsider to the political system, someone who had no ties to any of the corrupt activity in Washington. As such, one of Mr Trump’s themes was a pledge to “clean up the swamp”, to rid the nation’s capital of the cronyism and shady practices that had become standard operating procedure.

In another sense, though, I would say that Donald Trump’s utilization of personal stories of identity was rather feeble. While he sketched out the skeleton of a narrative based on his past experience, he did not go nearly far enough in that direction. As a result, his stories remained vague and superficial.

How should he have taken this dynamic further, in my opinion? Had I been coaching Mr Trump (or Mrs Clinton, for that matter), I would have tried to train him to tell specific personal anecdotes from his life experience. How did he learn about negotiating and decision-making? What were some of the key moments, events, people and decisions that shaped his world view? How will the lessons of his past serve him as president?

As my years of research and experience have shown again and again, and as I have written repeatedly, personal stories of identity are any leader’s most powerful tool of influence. Consequently, I often watch political debate to see if any candidate is effective at “leading by autobiography”. In the case of Hillary Clinton, I found this type of discourse totally absent. Donald Trump, on the other hand, did use his life story somewhat. It was perhaps too shallow and ill-defined for my taste, but he did nonetheless try to give people a story they could latch onto.