In search of the power behind Trump’s superficial narrative: Part One 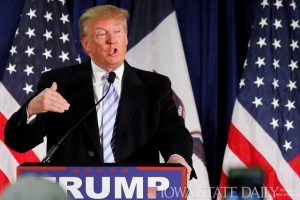 This week, I continue my examination of the effectiveness of Donald Trump’s personal narrative. At first, my plan was to do a post pointing out some of the instances where Hillary Clinton might have used her own stories and life experience to great advantage. Recently, though, I have seen a bit of television reporting that gave me further insight into how much Trump’s tales about his past had a deep impact on many voters.

As I wrote in the previous post, the Republican candidate’s use of personal storytelling was far from a brilliant execution of my concept of “leading by autobiography”. His stories of “who I am and what I stand for” tended to be general and superficial, lacking detail and depth about his life lessons and experience. At the same time, as the weeks pass and I watch some of the news coverage of President Trump’s first 100 days in office, I have seen more clearly just how effective his simplistic personal tales were.

Since the election, CNN has embarked on an interesting project. Several reporters have been going out to various communities across America, with the express purpose of interviewing people who had voted for Barack Obama in 2008 and 2012, and then proceeded to vote for Trump in 2016.

It appears that CNN is still trying to comprehend and explain the Trump phenomenon, both to their viewers and to themselves. For the network, this is also something of a mea culpa. They are admitting that they, along with virtually all the mainstream media and pollsters, predicted this election completely wrong. I find it commendable that they are doing this type of self-analysis, trying to gain some perspective on what they failed to see.

One member of the CNN team who has led this effort is political commentator Van Jones. A fervent supporter of both Barack Obama and Hillary Clinton, Mr Jones was particularly outspoken on the night of Trump’s electoral victory. In the heat of the moment, his post-election chronicle turned into something of a tirade.

Jones declared that the “miracle” the Trump supporters were seeing was a “nightmare” for many other Americans, particularly minorities. He said that some parents would be going to bed that night asking themselves: “How can I explain this to my children?” Then, he spoke in deeply personal terms: “It’s hard to be a parent tonight for a lot of us. You tell your kids ‘don’t be a bully’; you tell your kids ‘don’t be a bigot’…and then you have this outcome…This was a whitelash.”

To his credit, in the weeks following Trump’s victory, Jones made the decision to go on the road, to meet with the white working class. Rather than dwell on his personal feelings, he would go out and listen to some of the people who had supported president-elect Trump. As his election night anger and furor subsided, he was left with a need to understand how it all had happened.

While I was interested in this question—hoping myself to gain some insight on how this totally unforeseen and unpredicted electoral triumph was indeed possible—I had another major motive for following Mr Jones’ reports closely. I was curious to see how effective Trump’s narrative had been at moving these people. Had his stories of being the outsider who could clean up Washington, or of being the deal-maker who would negotiate better agreements for America, truly reached America’s heartland?

As such, one of the elements of Jones’ initiative that surprised me most was how many Trump voters he found from staunchly Democratic areas, people whose families had never before voted for a Republican. Listening to these interviews gave me some additional perspective on just how well Trump’s narrative resonated with white working class Americans, and on how this narrative did indeed contribute to the result of the election.

Next time, I’ll discuss some of the conclusions I took away from these interviews.