Using a narrative-based approach to explain the failure of Hillary Clinton’s campaign
Posted on May 25, 2017 in Politics & Storytelling 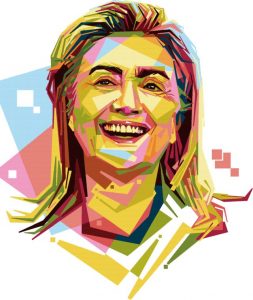 next few posts, I plan to go deeper into my explaining my conviction that Hillary Clinton’s loss to Donald Trump was due in large part to her failure to define and tell a meaningful personal narrative.

On the 22nd of May 2016, some six months before the United States presidential election, candidate Hillary Clinton appeared on the popular and influential Sunday morning talk show, “Meet the Press”.

As I happened to be in the US on that day, I was pleased to have the chance to see Mrs Clinton live, particularly because of my interest in observing how candidates approach this type of interview. In light of my background and field of study, I hoped to hear some compelling stories from her life experience, personal tales that express who she is, what she stands for, and how she sees the future.

So, throughout the interview, I watched and waited. Moderator Chuck Todd provided a number of openings for the Democratic nominee to reach out to voters, to speak from the heart, to tell people what truly matters to her.

While she could have done this effectively on several occasions, there was one particular question that stood out to me as an instance of missed opportunity. It was an extraordinary moment that Mrs Clinton should have used to say something inspirational to the nation’s voters. The moderator’s gentle challenge to her was: “If you could sum up, what is the big idea of your candidacy?”

Whenever a reporter poses this type of vast, open query, it is an opportunity that the speaker must be prepared to take advantage of. In fact, it is such a common and predictable question that a seasoned candidate should greet it with vigor, with an energetic and inspirational response that speaks to the core of who she is and what she truly stands for.

It is also an ideal opportunity to open up to the viewers with something personal, to tell a story of identity, a tale that expresses some aspect of her core beliefs and values, and to do it in a distinctive way that demonstrates her uniqueness. For Mrs Clinton, it was her time to connect with the people, to give them reasons to trust her, and to encourage them to share her vision for their collective future.

As someone who has often coached speakers to respond to this type of question, I found her response astonishingly devoid of substance. It was simply one more of the many openings she missed. As was always the case, she failed to speak from the heart in ways that would have let the viewers understand her as a person.

I recall feeling a bit incredulous after Mrs Clinton’s utterance, and thinking: With all due respect, if you can’t do better than that, you really might lose this election.

That thought—that Hillary Clinton might indeed lose because of responses like that—was borne not of any notion of support or opposition to her candidacy. Rather, it was simply a sign of my personal frustration that she had so completely missed this outstanding opportunity to inspire, and to lead by autobiography.