On Hillary Clinton’s discourse: Where was the story that lets us inside? 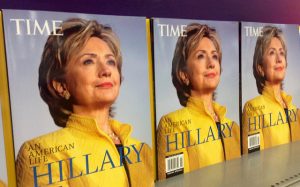 Last time, I wrote about Hillary Clinton’s exceedingly weak response in a Meet the Press interview from March 22, 2016. Personally, it was the first time I could see any real possibility that Donald Trump might defeat Clinton in November’s vote. With such vague and uninspiring answers to this sort of undemanding question, I thought that she was perhaps finding a way to lose the election that nobody thought she could lose.

Though I did make this observation to several of my audiences around that time, I should emphasize again that this was certainly not a prediction on my part, and that I am neither pundit nor clairvoyant. I was merely a frustrated observer looking for some uplifting declaration, or for any kind of strong personal statement. Where was the story that lets us inside, and why was there nothing that shows who she is and why she believes what she believes?

Rather than a deep personal reflection, or a strong statement about her core values, what we heard was a candidate coming back—over and over again—to a vague, hollow and meaningless slogan. Instead of revealing something of herself, Hillary Clinton remained entirely impersonal and distant.

“We are stronger together”, she repeated, without ever telling us specifically why, or how she proposed to do it.

Beginning with that Meet the Press interview six months before the voting, I began watching Hillary Clinton more closely. And, I kept asking myself— and others around me—the following question: Why did she not have more of a story to tell? I was baffled by her inability, or lack of desire, to talk about her life, or to use any form of personal story of identity.

In April 2017, five months after Mrs Clinton’s defeat, I gained some insight into the matter from Time Magazine’s commentary on the recently published book, Shattered, by Jonathan Allen and Amie Parnes. This tome is essentially an autopsy of the Clinton campaign, told from the perspective of a number of insiders the authors were able to interview.

While the book cites a number of reason that Hillary’s quest for the White House went awry, in my opinion there are two that stand out.

First, the entire campaign simply had no guiding theme or narrative. The authors christened Hillary Clinton’s electoral efforts the “Seinfeld campaign”, making reference to a popular American television series from the 1990s, a show that was famously about nothing. From the start, Allen and Parnes assert, Clinton could not define what her candidacy was about.

This lack of clarity was already evident in the spring of 2015, when her speechwriters struggled to hone in on the unifying principles of her announcement speech. Former Obama speechwriter Jon Favreau, whom Mrs Clinton had enlisted to help prepare this crucial address, would later state: ”Hillary didn’t have a vision to articulate. And no one else could give one to her.”

From the beginning to the end of her presidential run, this lack of ability to define a few central issues made Clinton appear removed and technocratic, more comfortable with policy details than with a bigger picture vision for the nation. As strategist and scribe Dan Schwerin would later write: “Our problem is missing the forest for the trees. We’ve never found a good way (or at least a way she embraces) that sums up her vision for how America would be different.”

According to the authors of Shattered, a large part of the problem was that the political pros Mrs Clinton hired simply did not know her very well.

A second reason for Hillary Clinton’s reluctance to tell her own story was that she and her advisors felt no need to do so. In the final months, in fact, the Democrats were thoroughly convinced that Trump’s negatives would be the deciding factor in the election. Soon after Clinton clinched the nomination, Barack Obama appeared with her at a joint event in North Carolina. Inspired by the occasion, the president let loose on Trump, then bounded jubilantly offstage. “This is too easy,” he said to top Clinton aide John Podesta, according to the authors. “There’s just so much material.”

To me, though, focusing on her opponent’s flaws was a monumental tactical error by the Democrats. They made this campaign more about attacking Trump’s character than about finding Mrs Clinton’s own narrative and articulating it to the populace.

In the end, attacking Mr. Trump, no matter how successfully, could not fix the underlying problem for Mrs Clinton: her broken relationship with voters, and her lack of a narrative to address it.