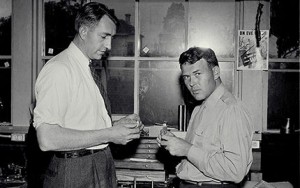 Writing these past few weeks about leaders who eventually come to the conclusion that business is mostly a people game has caused me to wonder why more start-up ventures don’t think about this from the outset. After working with a wide variety of entrepreneurs in the past twenty years, I can safely say that many of them would have avoided a variety of unnecessary problems by first getting the right kind of individual on their bus.

It is indeed a rare entrepreneur who thinks early enough about managing the people side of things. Many are so consumed by getting a product to market quickly or implementing a new strategic idea that they tend to put the “what” before the “who”. In other words, they think first about the business concept, then about the people to hire. That is why one of my favorite corporate stories is about the founding of Hewlett-Packard. They did it quite differently.

In late August 1937, Bill Hewlett and David Packard, two recently-graduated Stanford engineers, met to discuss the idea of working together and founding a company. They threw around some general notions about how they would design products in the electrical engineering field, without focusing specifically on what the first of those products might be. In fact, the notes from their early meetings contain a remarkable statement: “The question of what to manufacture was postponed.”

As any business student will tell you, this is not the recommended way to begin a new venture. There was no great product idea, no grand plan to disrupt a marketplace, no particular strategic insight, and no clear path to a competitive advantage. All these two young engineers appeared to have were vague notions about the “feel” of the place they wanted to create. How could such a business have any chance of success?

Today, of course, Hewlett and Packard are widely credited with launching the modern high-tech revolution. The celebrated garage on Addison Avenue in Palo Alto, where their start-up began, bears a bronze plaque proclaiming it the “Birthplace of Silicon Valley.”

If the tale of “The Garage” has indeed become legend, a classic saga of engineering and entrepreneurial prowess, reducing it to these elements may cause us to miss the most important point of the story. The mythic garage narrative does little to explain what I would consider the true greatness of the two men and their undertaking. For the extraordinary insight that came out of the original discussions in that garage was more far-reaching for its innovative approach to people management than for any sort of technical expertise.

The initial planning sessions of Hewlett and Packard may not have yielded a clear product strategy or road map to a competitive advantage. What they did produce was something that proved far more valuable: a plan for how to treat people and build a culture (though no one would use this word in a business context until almost fifty years later!). Before doing anything else, the two engineers wrote down the five core principles that would become the HP Way.

While each of the five principles is interesting in its own right, for our purposes today let’s focus on Principle #3 of the HP Way: “The Hewlett-Packard company believes the best results come when you get the right people, trust them, give them freedom to find the best path to achieve objectives, and let them share in the rewards their work makes possible.”

Hewlett and Packard may have been engineers and inventors of considerable prowess, but their greatest contribution to the world was ultimately social, as much organizational as technological. Above all else, they were visionaries who would nurture a corporate culture and management style that could keep pace with the ever-accelerating evolution of the electronics industry. They designed an approach that respected personal autonomy and stressed corporate decentralization. They systematically fostered employee satisfaction and morale. All this would eventually lead to a steady stream of leading-edge, highly profitable products.

In sum, their greatest product was the Hewlett-Packard Company itself, and their competitive advantage the HP Way. It was also perhaps their greatest contribution to the high-tech revolution, since the people policies they forged, and the culture they succeed in building, would have a profound effect on the evolution of Silicon Valley.

Of course, many of the practices that Hewlett and Packard instituted are widespread in the management of today’s organizations. But, just how radical was all this back in 1937? I will explore that a bit more next time.