Jack Welch and “the people game”

Jack Welch and “the people game”

Jack Welch and “the people game”
Posted on May 28, 2015 in John's reflections, Leadership
0 Comments 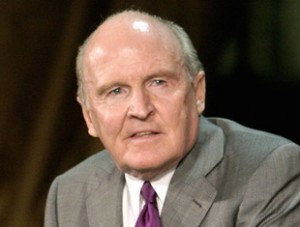 I referred last time to an assertion of one of my business school professors, back in 1983, that we tend to focus on “hard” stuff in our schools of management. Only later, when we have years of experience as managers in organizations, do many of us come to the realization that the “soft” stuff—human behavior and people management—matters more. As he said: “In time, you’ll discover that it’s mostly a people game.”

As I was writing that post, I reflected on the many examples I have seen of this phenomenon—stories and quotes from CEOs or other top managers who seem to focus increasingly on the human side of their organizations as they advance through their careers. By this observation, I do not mean to imply that they were not at all people oriented in their earlier years but rather to say that they seem to “discover” more and more that managing is indeed a “people game” above all else.

One of the most striking illustrations of this tendency is legendary General Electric CEO Jack Welch, who is widely recognized as one of the outstanding business leaders of the past century. There is a Harvard Business School case, called “GE’s Two-Decade Transformation: Jack Welch’s Leadership”, that I taught in various business courses and leadership seminars for over a decade, in all parts of the world. One of the reasons I like this case so much is that it is a rare phenomenon: a study of a single leader over a long time period.

Unlike most business cases, which tend to focus on a specific problem, opportunity, or situation, this longitudinal study affords us an opportunity to observe the CEO’s evolution. We get to compare the man at the beginning and at the end of his time as leader of a major corporation, and to see a number of intermediate steps along his path.

In the case of Jack Welch, students are often surprised to see how much the famous “Neutron Jack” of the early 1980s, a man who eliminated hundreds of thousands of jobs as he rationalized the corporation, became a people-centered manager by 1999.

What I find particularly interesting are the videos that accompany the case. Christopher Bartlett, the professor who authored the entire teaching package, filmed Welch at various points between 1981, when he took over as CEO, through 2000, when he stepped down. Several of the recorded sessions show Welch interacting with students in classrooms or auditoriums at Harvard; others are private interviews between Bartlett and the CEO.

In the earlier videos, Welch speaks most often about “hard” elements of business—the facts and the numbers. When he addresses the students in 1985, he talks of how he has been restructuring the portfolio and streamlining the workforce for increased efficiency. Further on, in segments from 1989 and 1994, he focuses on productivity, operating margins, processes, getting employees to “stretch”, doing things by the numbers and evaluating results. While he does mention the quality of GE’s people in a few spots, one has the impression that it is something of an afterthought, with corporate systems having more importance.

Then, the final exchange between the professor and the CEO, from 1999, is a bit of a surprising one, a statement that allows us to see how Welch’s twenty years at the helm of GE have transformed him:

Bartlett: “As you look back on these last 20 years, personally, you as an individual and as a chief executive, what do you think are your biggest learnings? How different are you today as a manager than you were when you took over in 1981?”

Welch: “In 1981, I was much more of a hands-on [manager], very operational, very much interested in what piece of the portfolio you would keep and you wouldn’t keep, the nuts and bolts.”

“I see the job as manager today so much clearer. I see it as walking around with a can of fertilizer in one hand, and a jug of water in the other hand. And, you think of the employee population as a garden, and you’re pouring the fertilizer on, and pouring the water on, and you want the flowers to grow. Some will grow, some you’ll have to cut out. But your job is to constantly pour the fertilizer and the water on, and give everybody a chance to flourish.”

This story, of a leader becoming increasingly focused on people development as the years progress, is certainly not unique to Jack Welch. In fact, I have seen the theme repeated over and over, in a variety of contexts. We’ll look at some more examples soon on this blog.