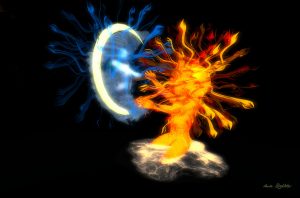 In a post dated March 24, I listed some of the items I reflected on as I watched CNN’s interviews with Trump’s “crossover” voters from the heartland of America. Among them was that large numbers of these voters seem to have chosen more for emotional than for rational reasons.

Who exactly are the crossover voters that CNN has been showing on their forays into Middle America? While they give no specific definition, the reporters sought out people whose demographic profile made their vote for Donald Trump an enormous surprise to pollsters. Most of them live in regions whose citizens lean heavily toward the basic views of the democratic party, and they come from working class families with long histories of voting almost exclusively for Democrats. All of them had backed Barack Obama in the previous two presidential elections. So, why had they not seen Hillary Clinton as their logical choice in 2016?

One of the primary elements that comes forth clearly in these video interviews is the role emotion played in the decision-making process of these working class voters.

During the campaign, even many of her detractors conceded that Hillary Clinton had logic and reason on her side. She appeared to be well organized and clear with her proposed practices and policy ideas, while her opponent often did not. Important insiders from the Democratic party, along with much of the mainstream media, were calling her the “most prepared and most qualified candidate in history”.

Virtually all the experts took it as given that Clinton’s experience, her mastery of the issues, and her commitment to Democratic values would make her the clear choice for the working class. What the pundits and polling organizations missed, though, was the extent to which Donald Trump’s discourse was reaching these people emotionally.

Mrs Clinton’s lines of argumentation were precise and highly rational. When faced with a challenging question or dilemma, she responded with policy statements that demonstrated her knowledge of the issue: a higher minimum wage, equal pay for women, profit-sharing for employees, opposition to the Trans-Pacific Partnership, or stricter enforcement of trade rules to protect workers.

For his part, Mr Trump was responding with fiery speeches at rallies, and irate tweets at all hours of the day and night. To these voters, Clinton was coming across as a removed technocrat from inside the system—giving them more of the same: standard Washington talk. In contrast, Trump was the angry outsider who shared their frustration with those in power, and he represented some hope for change. As such, they viewed him as the more authentic and believable of the two.

In the end, for many people in Middle America this choice was more about emotion than about logic.

While I was surprised by the level of irritation in some peoples’ remarks during the CNN interviews, I now understand their emotional response to Donald Trump’s discourse. In addition, the basic concept that “emotion trumps fact and reason” is far from a new one for me. For more than two decades now, I have been a proponent of the idea that narrative argument is more powerful than rational argument, whenever and wherever one seeks to influence one’s world.

In my consulting work with all types of enterprises, and particularly with entrepreneurs, I have long employed the phrase “narrative argument simply trumps rational argument”. (Yes, I did already use the term “trumps” back then, long before Donald Trump became a player in the political realm.)

In politics as in business, personal storytelling is such a forceful tool because stories provide a unique way to reach both the head and the heart of the listeners. One can criticize Mr Trump’s storytelling—or his discourse in general—in a number of ways. For me, though, the crux of the issue is this: His speaking may not have been sophisticated or polished, but it certainly was effective at eliciting emotion among many of his followers.