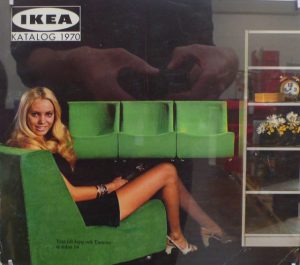 Last time, I wrote that one of the best examples I have ever found of using personal narrative to influence one’s world was that of IKEA and its creator, Ingvar Kamprad. In fact, IKEA’s corporate culture is so tightly intertwined with the origins of its iconic founder that it is sometimes difficult to separate the two.

On a surface level, IKEA has an identity that begins with Sweden. Numerous observers have attributed the initial success of IKEA’s no-nonsense, build-it-yourself furniture to the Swedes’ obsession with functionality. Lars Engman, IKEA’s former design manager, often commented that a preference for reliability over fashion was a typically Swedish trait. As he stated in 2003: “Sweden created the Volvo, Italy the Ferrari.”

On a deeper level, though, the story is even more compelling. In fact, IKEA’s values, beliefs, and ways of operating its business go far beyond being merely Swedish. They are a direct reflection of the specific region where Mr Kamprad was born and lived his early years: Småland.

The Nordisk familiebok, a popular Swedish encyclopedia, describes the Smalandian as “awake and smart, diligent and hard-working…cunning and crafty, which gives him the advantage of being able to move through life with little means.”

When I first read these words years ago, I thought that they constituted a remarkably accurate description of Kamprand and his company. As such, what we see here is a profound story of origin. That is to say, at IKEA, our very sense of  “who we are” and “what we stand for” is inextricably linked with the place we come from.

Kamprad often referred to the land of his birth, and to its inhabitants’ traditional values and characteristics—their craftiness, their dogged persistence, and their ability to make do with limited resources. He liked to say that Smålandians are a straightforward people who speak little, but who do as they say. For example, he commented in a 2016 documentary: “It’s in the nature of Småland to be thrifty. If we want to be cost-conscious, we should do it, not just talk about how cost-conscious we are.”

As such, IKEA’s story of “who we are” begins with frugality. And, rarely have I encountered an instance of a company founder who so completely and steadfastly lived the narrative he espoused. As the British newspaper The Guardian wrote in its recent obituary: “You can perhaps take the farmer’s son out of Småland, but in Kamprad’s case you can’t take Småland—a harsh, agricultural and punishing region—out of the boy.”

Indeed, Ingvar Kamprad was convinced that his own legendary penny pinching had played a role in making IKEA one of the world’s top brand names. In any case, he certainly was renowned for this obsession with thriftiness.

Throughout his life, Kamprad eschewed luxury, driving an aged Volvo car, always traveling economy class, and buying his own groceries. He even confessed to shopping in the late afternoon when prices were likely to be reduced. In accordance with his passion for conserving resources, he had himself downgraded from a suite to a small single room, in a New York hotel that he owned.

While some of these stories may seem to be exaggerated or apocryphal versions of corporate lore, those close to the founder tell us that the accounts are indeed accurate. Torbjorn Loof, the long-time CEO of Inter IKEA (the owner of the brand), set the record straight when he says: “Every bit is true. He did it because that is what he believed in… whatever you stand for, you should live up to.”

At times, outsiders saw Kamprad’s parsimonious behavior as obsessive, even miserly. To the people who knew him, though, the founder’s extreme penny pinching was not so much out of grumpiness but rather out of modesty. Long after becoming one of the world’s wealthiest individuals, he was famous for driving only Škodas and aged Volvos, and for wearing secondhand clothes purchased at flea markets. As one acquaintance who visited his home in Switzerland commented: “He was so unassuming, you’d never guess at his wealth. The whole family, they are just not interested. There are no fancy cars or watches even. The company is the passion. And yes, he was a friendly person.”

Frugality, though, is merely one of the defining characteristics of Småland —and of Mr Kamprad. We’ll explore some of the other aspects next time.