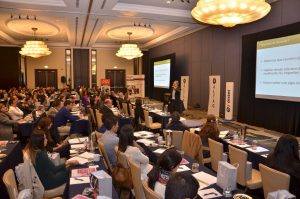 Last Thursday, following my speaking engagement at the JW Marriott Hotel in Lima, I went for a late afternoon lunch with the organizers of the conference, Diego and Francisco from Alta Gerencia. The restaurant we chose is one of my favorites, not only in Peru but in the entire world—Bravo Restobar. Owner and head chef Christian Bravo is a good friend of Diego, and he joined us for a few hours of eating, drinking Pisco sours, and philosophizing.

I had just finished two days of speeches, book signings and media interviews, all based around the central theme of “storytelling and influence for everyone”. In the large group conference and workshop I had just completed, I emphasized four of my typical take-away concepts:

1. Leadership begins with self-knowledge—clear ideas about who I am, what I stand for, why I do things the way I do, and how I see the future.

2. People of influence, in any group or organization, lead by autobiography. They learn to craft and tell personal stories of identity that inspire others.

3. The most effective personal stories are unique to each individual, but they tend to follow general patterns that we can identify and study.

4. This powerful form of personal storytelling and influence can be learned by anyone, through a combination of self-reflection, coaching and deliberate practice.

Near the end of the session, a group of participants had asked one of the common questions I often get from audiences. It goes something like this: “If this form of influence is so effective, and if we can all master it, what are the greatest impediments to success? Why don’t large numbers of people achieve such mastery?”

Of course, this is a query I have answered hundreds—perhaps even thousands—of times in my teaching, consulting and public speaking. For some reason, though, it remained in my mind all afternoon, throughout our session of eating, chatting, and joking at Christian’s restaurant.

At one point during our lengthy meal, I stood up from the table and walked a bit through the building to stretch my legs. High on the wall above the massive back bar, I noticed one of the largest and longest posters I have ever seen. It was an advertisement for a famous Scotch whiskey, depicting a dark, elegant man with a top hat and a cane, moving forward. Beneath his image sat a straightforward inscription: “Johnnie Walker…Keep Walking”.

Upon seeing this picture and these words, it struck me that they provided an insightful answer to the question of why most people do not develop their full capabilities as storytellers and as people of influence in their worlds. They simply do not “keep walking” long enough.

In my doctoral dissertation, and in the book The Seven Rules of Storytelling (co-written with Loick Roche, available in French and Spanish, but unfortunately not in English), I actually use language that is quite similar to Johnnie Walker. The number one reason for failure to become an effective communicator or storyteller, I wrote, is simply “not staying on the path long enough”.

Learning to influence one’s world by telling personal stories of identity is a skill that one must develop, hone, and maintain. Often, I tell people that it is much like learning tennis, golf, acting, or guitar playing. If we aspire to achieve anything more than low levels of skill at such endeavors, we must carve out time for practice in our daily and weekly schedules.

In my coaching and consulting activities, I have been fortunate to watch a great many individuals learn to influence their worlds with their personal stories of identity. Others made significant progress in the early weeks and months, but with the passage of time, they became less diligent, less attentive to the importance of mindful practice.

Might we say that most failures occur because people simply stop walking?