Stories and remarkable service
Posted on June 28, 2017 in Marketing and branding, Storytelling 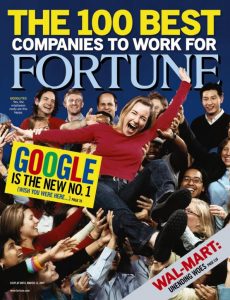 June 13th, on my flight from Buenos Aires to Lima, I was reading a study I had saved from Fortune magazine, about the 100 best places to work in the United States. It is a piece they do every year in March, and I was trying to recall the same article from years past, wondering which companies – if any – were perennial members of this exclusive “club”.

The question in my mind was unexpectedly answered a few pages further on, as the article had a short section on “Legend Companies”. These enterprises have made the top 100 list every year since the survey began.

What I learned was that Fortune’s “Best Companies to Work For” study is celebrating its 20th anniversary. During that time, a total of 452 different employers have been named one of the hundred best of that particular year. Many companies have made the list once or twice, then fallen off, and never returned. Some have gone off the rolls and then found their way back again in subsequent years. In the final analysis, though, only 12 companies have made every list for the past two decades. They are the ones Fortune has singled out for legendary status.

One of these “legend” companies is Marriott International. As coincidence would have it, I was on my way to a two-night stay and speaking engagement in one of the nicest sections of Lima, Miraflores, and at one of its finest hotels, the JW Marriott.

Other than the one I was headed for that night in Lima, I have stayed at JW Marriotts on a number of occasions, in Quito, San Francisco, and Dubai. While I am not an extremely serious student of the hospitality industry but only an attentive client at certain times, I know the “JW Marriott” brand as one of the high-end offerings in the Marriott brand portfolio. Whenever I stay at one of these hotels for a speaking event or a business meeting, I seem to experience extraordinary levels of service.

For example, one time when I arrived in Dubai before the sunrise, I was met at the door by a woman named Sara, who said that she had been waiting for me. When I asked her if the hotel routinely provided such greeters, she told me “no, not really”. Rather, she had seen that I was arriving from a long overnight flight, and she had taken the initiative herself.

Sara had my room key ready, and she took me straight to the elevator, bypassing the small queue of people waiting at the front desk. On the way up to my room, she explained: “I just like to do this whenever I can, for people who may have had a difficult journey to get here. I noticed that you were coming in early after a long flight.”

Needless to say, I was impressed with that level of individual attention. Furthermore, I was an ordinary client at the hotel, not a frequent guest or a customer who had paid a high rate for a special room.

In any case, I had thought about Sara when I read the Fortune piece on my flight from Argentina to Peru, and again as I rode in the taxi to the JW Marriott in Lima. In particular, I was beginning to wonder what role storytelling might play in Marriott’s corporate culture. Often in outstanding service companies, I have found that cultures are defined and perpetuated by the stories employees tell, far more than by policies outlined in a manual, or lists of work rules and procedures.

When I arrived at the front desk of my hotel – sadly without personal greeter this time – I asked the woman at the counter if Marriott people often told stories that portrayed examples of extraordinary service or commitment. She responded, “all the time”, while handing me a 70-page booklet entitled “Spirit to Serve”. In this little book are two dozen recent anecdotes from a diverse collection of Marriott associates. They come from hotels in all parts of the world, and the protagonists are people from every level of the company.

Opening the book to a random page, I read about Hamdy Khalafalla Mohamed, a bakery chef at the Cairo Marriott Hotel. In the next post, or sometime in the near future, I plan to share a part of his story.