Oprah for president?
Posted on January 12, 2018 in Leadership, Storytelling 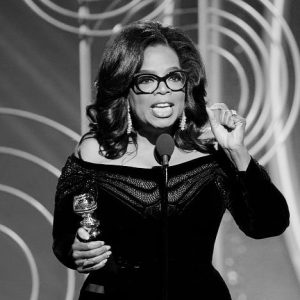 Today, I write once again while sitting on an airplane, this time heading for a few days of work in the US. One of the things I enjoy doing in international airports is picking up newspapers from a variety of places and cultures. It is a ritual that gives me a feeling of nostalgia, a reminder of what I used to do on such journeys in the days before cell phones, portable computers and other reading devices changed the ways we consume information.

As such, thumbing through the papers from New York, Paris, Amsterdam, London, and Madrid left me the impression that the entire world was enamored with a speech by Oprah Winfrey at the Golden Globes award ceremony in California last Sunday. Reactions to Oprah’s nine minutes of oratory were glowing, causing a number of people to wonder about the possibility of her running for political office in the near future.

Some of the most enthusiastic remarks I saw appeared in France’s widely-read daily Le Figaro, which featured an in-depth analysis of the television star’s discourse. A headline declared that Winfrey’s stage presence and charisma had already made her “a favorite in the race for the presidency”. Journalist Philippe Gélie supported this notion with a quote from renowned actress Meryl Streep, who raved: “[Oprah] launched a rocket tonight. I don’t think she intended to announce her candidacy, but now she has no choice.” (translation mine)

In the New York Times, James Poniewozik penned a piece entitled “What Politicians Could Learn From Oprah Winfrey”. The article opens with a close-up picture of Oprah holding her award, and this caption beneath: “After Oprah Winfrey’s speech accepting the Cecil B. DeMille Award for lifetime achievement at Sunday’s Golden Globes, speculation about a possible presidential run soared.”

Though I have not listened to her speech as yet (which I plan to do when this plane has landed), I have heard Oprah often enough to understand what is so impressive in her discourse. She is highly effective at using personal stories in ways that inspire her listeners. What interests me at this moment, though, is not the speech itself but rather the way the press is reacting to it. In particular, the New York Times’ analysis of her Golden Globes acceptance speech focuses squarely on  the personal storytelling angle. As Poniewozik writes:

“Above all, it’s a story. And it’s a story about stories. It moves from the personal (young Ms. Winfrey watching Sidney Poitier win an Oscar) to the communal (women in Hollywood, and women working on farms and even “some pretty phenomenal men”). It links “your truth” and “absolute truth.” It tells the audience: I have my struggle, and I know you have yours, and that connects us all…”

My reaction to this sort of commentary is twofold. On the one hand, it is gratifying to see the focus on stories and tellers. On the other hand, I cannot help but wonder—with a healthy dose of amazement—why it has taken so long for much of the world to understand the power of personal storytelling to connect with an audience, and to move people to action.

In other words, and I want to express this thought without any hint of self-promotion or arrogance, Oprah Winfrey does precisely the things I have been working on with my clients and students for more than two decades. She tells personal stories of identity in ways that inspire others. She connects her stories to something universal, something uplifting for the listeners. She crafts collective stories of identity, presenting herself as the protagonist in a narrative that her followers will want to share in.

Poniewozik writes that elections are merely “contests of stories”. If such is the case, one can argue about the merits or appropriateness of television stars entering the realm of politics. Should celebrity and storytelling prowess be qualifications for higher office?

What is unarguably true, though, is that politicians can certainly learn a great deal from master storytellers such as Oprah Winfrey.