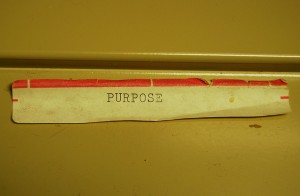 We ended last time with the notion that managers should take the time to think about “building their own cathedral stories”. My work and study of the past two decades have shown me that the most effective managers are able to create narratives that inspire their team members—even those who perform the most mundane and tedious of tasks, such as breaking rocks in a field.

In the example of the cathedral, it is the story in the worker’s mind, a vision of contributing to a noteworthy and enduring endeavor, that allows a man breaking the rocks to see, and to believe in, the broader significance of his strenuous assignment. He is not merely carving stones because the boss told him to do it. As part of a group building a structure to reach toward the heavens, he sees himself as an individual making his mark on the world.

When I say that a “cathedral narrative” is one of a manager’s most powerful tools for team building, we should understand that this narrative can take on a multiplicity of forms. What is important to a group is to share stories that remind the members of something more meaningful than their daily tasks.

Much of the literature about high-achieving teams demonstrates that stories of deep purpose are often an underlying motivator, a force that drives the team to extraordinary results. For example, in Organizing Genius, Warren Bennis and Patricia Ward Biederman conclude from their study of great groups that they always “think they are on a mission from God, doing something urgent and monumental.” Heike Bruch and Sumantra Ghoshal, in A bias for action, use a different image, stating that successful groups always feel that they are “slaying dragons and winning princesses.”

The concept of purpose for today’s workers: These days it seems, the press, research, and news reports are replete with stories about the Millennial generation and its search for purpose in the workplace. For example, a 2011 report conducted by Harris Interactive found that the number one factor that young adults ages 21 to 31 wanted in a successful career was a sense of meaning. Far more than previous generations, young adults today appear to be less focused on financial success than they are on making a difference.

Of course, meaning is not an easy concept to manage in a group, as it may signify different things to different people. However, research is increasingly showing that its overriding feature appears to be connection to something bigger than the self. People who lead meaningful lives feel connected to others, to their work, and to a life purpose.

The trend of workers seeking meaning in the workplace presents both challenges and opportunities for managers. Particularly in organizations whose daily work is neither glamorous nor world-changing, the challenge is to find the images that will inspire employees. It would be unrealistic and naive to claim that every group’s tasks can be reframed in ways that make workers feel that they are building cathedrals, slaying dragons or putting their dent in the universe.

At the same time, people’s search for meaning in their work provides a fascinating opportunity for middle managers. While I certainly admit that not every job can be redefined as a quest for greatness or far-reaching change, I firmly believe that any kind of work can be reframed to help the participants view it with an increased sense of importance and purpose.

As managers, one of our most important tasks is crafting the stories that give people a sense of doing something more meaningful than their daily grind. When we are successful at doing that, we are on the road to improving the low levels of employee engagement around the world.