The Symbolic Power of Sports 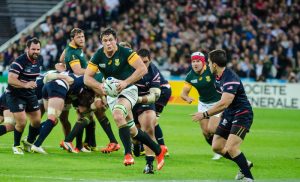 When Nelson Mandela won the presidential election of 1994, he took over a sharply divided country, one that was just beginning to emerge from decades of apartheid rule and white domination.

Feeling strong and vindictive, an overwhelming majority of black South Africans saw a great opportunity to change the course of their nation. Indeed, most members of the president’s own party advocated a radical cleansing of the past, a complete dismantlement of all the remnants of Afrikaner rule.

Among the most iconic symbols of Afrikaner power and superiority were the Springboks, the national rugby side that was among the whites’ greatest sources of pride. As was widely expected, one of the first proposals by the new black majority was to ban the traditional Springbok emblem, and to make the king protea the only acceptable symbol for all of South Africa’s teams. This highly-charged symbolic act had near unanimous support among the members of the newly constituted National Sports Council.

Even the Archbishop of Cape Town, renowned human rights activist and Nobel Peace laureate Desmond Tutu, came out publicly in favor of cleaning the country of the Springboks’ image.

And so, the logo so long treasured by the Afrikaners appeared to be doomed.

As we wrote last time, though, what happened in the world of South African rugby in 1995 is a highly unlikely tale, with a variety of unanticipated twists and turns. In the end, the Springboks found an improbable protector in the person of the newly-elected president.

If I use words such as “unlikely” and “improbable” over and over when I discuss the remarkable events of 1995, it is because a number of occurrences are among the most extraordinary I have ever seen, in the world of sport or elsewhere. For me, three surprising aspects stand out most particularly, and I enumerate them below.

The first implausible outcome was that the Springboks image—which for blacks represented decades of division, hatred and conflict—was preserved at all. In the end, it took an intervention from the highest office in the land to rescue it.

A second previously unimaginable aspect of the run-up to the 1995 World Cup was that Nelson Mandela—the former terrorist who had spent 27 years in an Afrikaner jail—would emerge as the primary advocate for rugby. For nearly all of their lives, Mandela and his fellow blacks had seen this very sport as a symbol of white tyranny and unfairness. Some members of his own party even suggested that their leader’s desire to save the Springboks was “crazy”.

Thirdly, and arguably the most improbable element of the entire situation, was that the Springboks would ultimately triumph in the World Cup. Pre-tournament results had been utterly disastrous for the host nation, and all of their major competitors were faring far better in their preparation matches.

Virtually no expert in the world gave the South Africans the slightest chance of reaching the final. In fact, local pundits were cautiously hoping only that the host team’s performance would not end in disgrace on their home soil.

From the outset of his presidency, and against all odds, Mr Mandela harbored an alternative vision of the Springboks, of what they could accomplish, and of what this World Cup might mean for all South Africans.

Though he had little knowledge of the game and had never followed it closely, an enthusiastic Mandela refused to believe the pundits. Instead, he viewed the upcoming tests with blind optimism, persisting in his idea that the Springboks would be successful.

There is a good portrayal of his sanguine attitude in the film Invictus. A knowledgeable colleague is going over some recent results and statistics with the president, explaining to him that things looked quite bad for the home side. “According to the experts”, his advisor remarked, the Springboks would be lucky to reach the quarter finals, and would certainly go no further.

Upon hearing this prediction, Mr Mandela became contemplative.“According to the experts”, he countered, “you and I should still be in jail.”

It was far more than positive thoughts, however, that would help spur the Boks on to victory. Nelson Mandela had a plan, one we will consider in some more detail next time.