Back to blogging: life lessons from great leaders 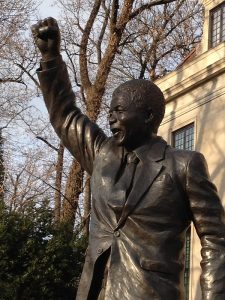 These past months, when circumstances forced me to take an unintended break from writing, it was gratifying to hear from the many people who said they missed my regular posts. To those whom I may not have answered directly, suffice it to say that some family and health issues have claimed much of my time and energy since February. Though these were not matters of life, death or covid, they nonetheless required my attention.

In any case, now feels like a good time to come back to writing once again, so I am reviving a book project and getting back to blogging.

As I see things today, my first task on the blog is to finish our discussion of how Nelson Mandela united South Africans during his presidency. This is simply one of the most remarkable and enlightening stories I know, and it leads nicely into my plan for future posts.

After Mandela, we will turn our attention to perhaps the most meaningful question that has come out of my study, teaching and speaking about leadership for three decades: When we examine the journeys of famous individuals and effective leaders, what lessons can we apply to our own lives?

Anyway, in our last blog entry, we observed that Nelson Mandela had faced considerable difficulty as he tried to convince others to join his vision of a unified nation.

At the conclusion of that post, though, we wrote that Mandela’s efforts to get black and white South Africans moving forward together were aided—quite dramatically and fortuitously—by an unexpected occurrence in the realm of sport.

In 1995, Mr Mandela joined in the excitement of many of his countrymen, as they prepared for South Africa’s hosting of the Rugby World Cup. On the other hand, he was perhaps alone in seeing this event as one that presented a broader opportunity for the nation.

The new head of state’s vision was that all races in the new South Africa would stand by the national side as it advanced toward a victory in the tournament’s finale. If the entire country got behind them, and if the team did achieve some measure of success, this would be a vehicle for bringing blacks and whites together in a common cause.

However, this bright and optimistic vision faced two rather sizable obstacles.

The first difficulty was purely a sporting one. A mere one month before the competition began, experts gave the host nation almost no chance of going far in the competition. Every day, local sportscasters lamented that the first world championship on their soil had come at a time when their squad was far weaker than those of its principal rivals—England, France, Australia and New Zealand.

The second stumbling block centered around the historical role of rugby in the nation’s culture. In fact, rugby had long been a source of division and contentiousness in modern South Africa. It was a sport played almost exclusively by whites—Afrikaners and other descendants of Dutch, German and French settlers. During apartheid, the South African Springboks, as the national team was called, were the pride of the white ruling class.

Blacks, on the other hand, played and watched football. In general, they hated everything associated with rugby, which they considered the sport of the oppressor. Prior to 1995, blacks often went to rugby matches, but only with the specific purpose of supporting the visitors, not the South Africans. These black spectators would howl and whistle in disapproval whenever the home team succeeded.

In the end, South Africa did triumph in the 1995 World Cup, in what is widely considered the most surprising outcome in the history of the game. In addition, President Mandela played a central role in this remarkable event, one that brought whites and blacks together for perhaps the first time, as they shared a truly moving moment.

The story of how Nelson Mandela managed to unite South Africa around the Springboks has its own share of unlikely twists and turns. As such, it will make a good subject for our next post.