I will miss Lucy Kellaway 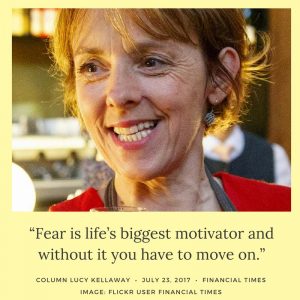 My post today is a bit of a departure from the sort of topic I usually write about. It involves an individual whose articles I have been reading nearly every week for the past 15 years, and her decision to leave journalism to pursue a new path.

Indeed, one of my favorite columnists, Lucy Kellaway of the Financial Times, is leaving the newspaper after a 32 year tenure there. For those unfamiliar with the FT or with Ms Kellaway’s work, she has been writing with exceptional verve and humor for more than two decades, poking fun at modern corporate culture, and sanctioning flagrant misuses of the English language in business correspondence.

Some time in the next few months, Lucy will begin a new career as a mathematics teacher in a “challenging” inner London secondary school. In so doing, she will be a trailblazer for the charity Now Teach, which she co-founded last year. The organization was set up to encourage successful professionals from the business world to retrain as teachers. The founders’ goal is to help address the shortage of mathematics and science teachers in English schools.

In a 2016 interview with The Guardian, Kellaway explained her rather unexpected choice: “I’ve had one of the nicest jobs in journalism by writing a column for 22 years. I love it, but I don’t want to spend my entire life doing it…I think teaching is hugely important and I’m in the luxurious position of being able to take on the task.”

It is an exceedingly rare occurrence that a successful 57 year-old journalist with a large following steps away from it all and engages in such a radical change of occupation. On a personal level, I find her initiative both courageous and admirable. What I find particularly interesting, though, is the second reason she cites for leaving such a comfortable job, in a place where she is so highly regarded.

As Ms Kellaway spells out in another interview, her new direction is not only about the desire to become a teacher or to help with a pressing issue in today’s society. Her choice of this new path also has to do with the fact that she simply feels no fear in performing her current duties. As she puts it: “Although I still love my work, I knew it was time to go once I realized I had stopped being frightened of writing useless columns. “Fear is life’s biggest motivator and without it you have to move on.”

In a recent column, Kellaway wrote of the sense of loss that will come from leaving her long-standing relationship with the newspaper’s readers. They are people whom she does not know personally, but who have been constantly at her side, as a sort of sounding board for her ideas. Losing them, she says, feels unnerving and scary.

At the same time, it is a different fear—one which may be harder to overcome—that pushes her on. While losing her readership may be a scary thought, “even this does not scare me as much as the thought of teaching ratios to bottom set Year Nine. That truly terrifies me—which is precisely the point.”

While I understand her reasons for moving on in life and praise her choice to contribute something meaningful to society, I will miss Lucy Kellaway and her writing. We have not always agreed about issues of organizational culture and human behavior. In fact, two of my past posts (on 10 December 2012 and 9 July 2015) were comments on columns where I felt her arguments completely missed the mark. Even when our views differed, though, I always found her commentary thought-provoking.

What I share most with Ms Kellaway, and what has provided me untold moments of laughter over the years, is a fascination with language, and with people’s seemingly infinite capacity to misuse it in an organizational context. In this aspect of her writing—as the self-proclaimed “prosecutor of corporate crimes against the English language”—she is particularly discerning, and able to express her opinions in the most scathing and witty manner.

Next time, as my small tribute to a retiring master craftswoman, I will cite some of the examples from Kellaway’s linguistic analysis that I have found most insightful and amusing.