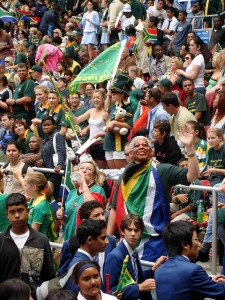 In the last post, we saw the importance of Nelson Mandela’s ability to interact with Afrikaners in their own language, something he learned to do during his long imprisonment. Speaking to them in their language was a way of gaining their respect, an act of winning them over and entering into their world, which led to deeper levels of communication and understanding. As such, he was able to transform the relationships with his guards from one of brutality and distrust to one of friendship.

Mandela often stated that he began to learn Afrikaans for strategic reasons: he wanted to understand his oppressors in order to prevail over them. At some point, though, this attitude of wanting to fight the white minority turned into a desire to reconcile with them. It was a change of posture that most of his black collaborators had difficulty accepting at the beginning of Mandela’s presidency, but one that is easier to comprehend if we see it as a natural outgrowth of his language study. His understanding of the Afrikaners’ culture left him with the wish to include them in defining a new nation.

When Mandela was elected president, the predominant attitude among his black compatriots was one of vengeance against the Afrikaners for decades of cruelty and injustice. But, Mandela had come to see things differently. A profound knowledge of his former oppressors—of their language, of their culture, and of what they held as important—made it easier to behave toward them with generosity of spirit, and even to turn this one-time enemy into a partner. The president’s ability and willingness to treat the Afrikaners with dignity changed the course of South Africa’s history.

A story and a symbol: Mandela understood the power of engaging everyone in building the new South Africa, to “use every brick possible”, as he used to say. As such, the new national story had to be one of forgiveness, reconciliation, and inclusion—and most importantly, not one of revenge.

With his knowledge of Afrikaans culture, the new president was the perfect person to write the story of collective identity that could bring the country together. And, history would provide an event that he could seize upon as a potential symbol of national unity: The 1995 Rugby World Cup would be staged on their home soil as the rest of the world watched, barely one year after Mandela’s inauguration.

The biggest problem the president had to face was getting his own people, the new black South African majority, to go along.

For decades, the Springboks—the emblem of South African rugby since 1891—were for the blacks a symbol of the brutality and injustice of the apartheid government. In fact, blacks had traditionally cheered for the opposing team, anyone who could beat the Springboks. Most black South Africans were initially shocked by Mandela’s request that the nation—both whites and blacks—rally around a team that the blacks had historically despised. Even the people closest to Mandela advised him that attempting to unify his countrymen in this fashion would be extremely risky and controversial.

But Mandela had learned from the Afrikaners about the culture of rugby and its importance in their world. When other blacks spoke angrily of their longing to rid the country of the Springboks as a national mascot, the president restrained them, and he emphasized three important truths. First, the Afrikaner was no longer the enemy but a partner in democracy. Second, white South Africans had long treasured their Springbok rugby. And third, if the black majority now took away rugby or the Springbok symbol, they would lose the whites’ support for the future of their emerging post-apartheid nation.

I have long thought that Mandela’s presidency was a remarkable event of history, because he was able to embrace forgiveness, avoiding all forms of triumphalism or desire for revenge. His was a true story of inclusion, born of a deep understanding of the other side, an understanding that could only have come from mastering their language and traditions. Because he had learned to converse with the “oppressors” in their own language, and because he had developed a deep appreciation for them, he was able to avoid vindictiveness. Only by proving that he understood and respected the white Afrikaner was he able to begin to unite the country.